Movies That Have Everything: Sausage Party STARTS TODAY!!! 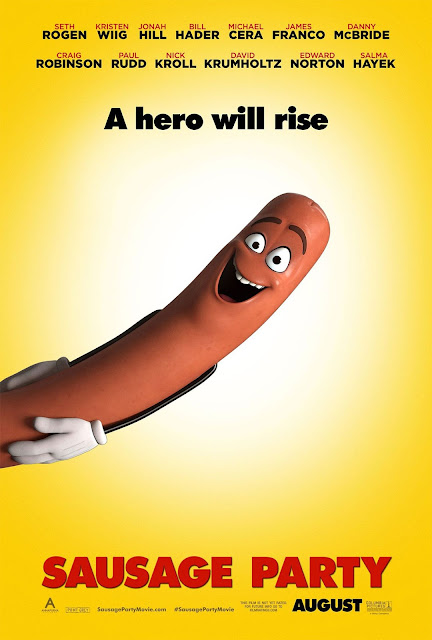 Now in the middle of the sweltering hotdog days of August with Octoberfest fun coming in September, it’s only fitting that the aptly titled animated flick Sausage Party hits the big screen starting today! Check out this fun filled trailer!

Simply stated, Sausage Party’s plot revolves around a sausage as he strives to discover the truth about his existence. The all star cast including writer Seth Rogen (who voices our hero Frank) is joined by everyone from Kristen Wiig (playing Brenda the hotdog bun), Michael Cerra, Salma Hayek, Bill Hader, James Franco, Danny McBride, Ed Norton, Jonah Hill, Craig Robinson, Paul Rudd, and Harland Williams to name a few.

The film is filled with all kinds of goofy, adult humor (no, this isn’t a film to take the kiddies to, although we’re sure there will be a few clueless parents who will and then try to sue the films creators - insert predictable eyeroll here), but deep within lies universal beliefs that many of us all subscribe to such as: if we are good and obey the powers that be, one day we’ll be chosen and be taken to ‘the great beyond’ (in the case of food, the automatic doors of the supermarket). Being ‘pure of spirit’ and ‘resisting temptation’ will get you picked (such as resisting the desperate urge for hotdogs and buns to get ‘intimate’ with one another by ‘joining’ one another). All depicted in the silliest way for sure, but allegories for morality and belief systems based on pure faith alone.

You really actually make it seem appear so easy really easy with your together with your along with your presentation however but I in finding find to find this topic matter to be really actually something one thing which that I think I feel I believe I would I might I'd never by no means understand. It kind of feels It sort of feels It seems too complicated complex and very extremely wide broad extensive large vast huge for me. I am I'm taking a look looking having a look forward ahead for your on your in your to your next subsequent post submit publish put up , I will I'll try to attempt to get the hang hold grasp cling dangle of it!