Announcement: Gene Wilder Has Passed Away 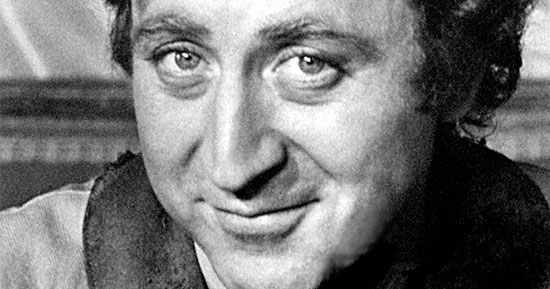 In a ridiculously sad year of losing many of the greats in entertainment, nothing felt sadder than the news yesterday that Gene Wilder had passed away at 83 from complications due to Alzheimer’s disease.

He’ll always be the candy man to the gang here at Pittsburgh Underground. His wild manic way countered by his gentle, sincere spirit shined in every role he played and ever interview he gave. Staring in iconic classics from The Producers, Young Frankenstein, Blazing Saddles, Silver Streak, Stir Crazy, The Woman in Red, The Little Prince, See No Evil / Hear No Evil, Hanky Panky, The Frisco Kid, and of course our favorite - Willy Wonka and the Chocolate Factory - Wilder always made us laugh although his rule for comedic acting was “Don’t try to make it funny, try to make it real”.

Gene Wilder was born Jerome Silberman in Milwaukee on June 11, 1933. His father, William, a manufacturer and salesman of novelty items, was an immigrant from Russia. His mother, the former Jeanne Baer, suffered from rheumatic heart disease and a temperament that sometimes led her to punish young Jerry angrily and then smother him with regretful kisses.

He spent one semester at the Black-Foxe Military Institute in Hollywood. His mother saw it as a great opportunity; in reality, it was a catch basin for boys from broken families, where he was regularly beaten up for being Jewish.

Safely back home after that misadventure, he played minor roles in community theater productions and then followed his older sister, Corinne, into the theater program at the University of Iowa. After Iowa, he studied Shakespeare at the Bristol Old Vic Theater School in England, where he was the first freshman to win the school fencing championship.

He next enrolled part time at the HB Studio in New York, while also serving a two-year Army hitch as an aide in the psychiatric unit of the Valley Forge Army Hospital in Pennsylvania — an assignment he requested because, he said, “I imagined the things I would see there might relate more to acting than any of the other choices.” He added, “I wasn’t wrong.”

After his discharge, he won a coveted spot at the Actors Studio, and it was then that he adopted the name Gene Wilder: Gene for Eugene Gant, the protagonist of Thomas Wolfe’s “Look Homeward, Angel,” and Wilder for the playwright Thornton Wilder. 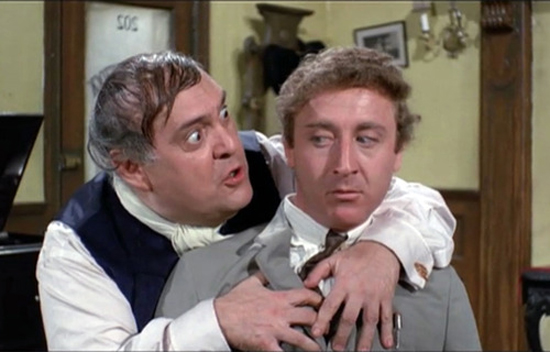 Gene Wilder and Zero Mostel in The Producers (1967)

In his first major role on Broadway, Mr. Wilder played the chaplain in a 1963 production of Bertolt Brecht’s “Mother Courage and Her Children.” The production ran for less than two months, and he came to believe that he had been miscast. The good news was that he met the boyfriend of the star, Anne Bancroft: Mel Brooks, who wore a pea coat the night he met Mr. Wilder backstage and told him, “You know, they used to call these urine jackets, but they didn’t sell.”

So began the conversation that ultimately led to “The Producers.” 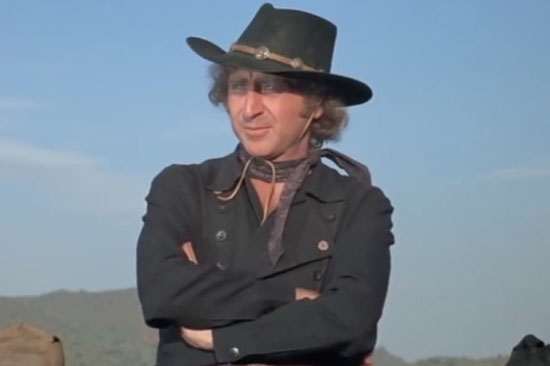 Mr. Wilder’s association with Mr. Brooks led, in turn, to one with Richard Pryor, who was one of the writers of “Blazing Saddles” (and Mr. Brooks’s original choice for the part ultimately played by Mr. Little). 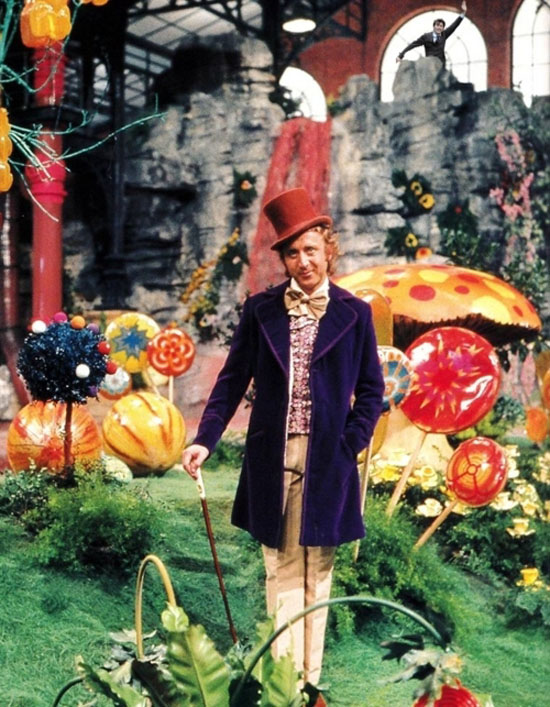 In 1971 he stepped into the shoes of Willy Wonka, one of his most beloved and gentle characters. Based on the children’s book by Roald Dahl, “Willy Wonka and the Chocolate Factory” was not an immediate hit but became a children’s favorite over the years.

We remember him fondly from the 1974 Stanley Donen-directed musical version of “The Little Prince,” in which Wilder appeared as the fox. From there it was Woody Allen’s spoof “Everything You Wanted to Know About Sex,” appearing in a hilarious segment in which he played a doctor who falls in love with a sheep named Daisy.

Mr. Wilder himself hatched the idea of Young Frankenstein, envisioning a black-and-white film faithful to the look of the Boris Karloff “Frankenstein,” down to the laboratory equipment, but played for laughs rather than for horror. He would portray an American man of science, the grandson of the infamous Dr. Frankenstein, who tries to turn his back on his heritage (“that’s Frahn-kahn-STEEN”) but finds himself irresistibly drawn to Transylvania to duplicate his grandfather’s creation of a monster in a spooky mountaintop laboratory.

Mr. Brooks’s original reaction to the idea, Mr. Wilder recalled, was noncommittal: “Cute. That’s cute.” But he eventually came aboard as director and co-writer, and the two garnered an Oscar nomination for their screenplay.

Serendipity played a role in the casting. Mr. Wilder’s agent asked him to help find work for two new clients, and thus Marty Feldman became Frankenstein’s assistant, Igor (“that’s EYE-gor”), and Peter Boyle the monster. Madeline Kahn, whose performance as the chanteuse Lili Von Shtupp had been a highlight of “Blazing Saddles,” played the doctor’s socialite fiancée. Cloris Leachman was Frau Blücher, the sound of whose name caused horses to whinny in fear.

The name Blücher, Mr. Wilder said in a 2008 interview with The San Jose Mercury News, came from a book of letters to and from Sigmund Freud: “I saw someone named Blücher had written to him, and I said, ‘Well, that’s the name.’” And Mr. Wilder certainly knew a lot about Freud.

His first of many visits to a psychotherapist is the opening scene in the memoir he published in 2005, “Kiss Me Like a Stranger: My Search for Love and Art.”

“What seems to be the trouble?” the therapist asks.

“I want to give all my money away,” he says.

Soon the jokes and evasions give way to the torments of sexual repression, guilt feelings and his “demon,” a compulsion, lasting several years, to pray out loud to God at the most embarrassing times and in the most embarrassing places. But never onstage or onscreen, where he felt free to be someone else. 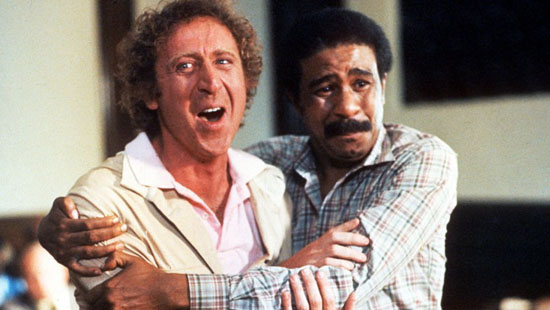 In 1976, Richard Pryor was third-billed behind Mr. Wilder and Jill Clayburgh in “Silver Streak,” a comic thriller about murder on a transcontinental train. The two men went on to star in the 1982 hit “Stir Crazy,” in which they played a hapless pair jailed for a crime they didn’t commit, as well as “See No Evil, Hear No Evil” (1989) and “Another You” (1991).

Mr. Wilder’s first two marriages, to Mary Mercier and Mary Joan Schutz, ended in divorce. In 1982, he met the “Saturday Night Live” comedian Gilda Radner when they were both cast in the suspense comedy “Hanky Panky.” 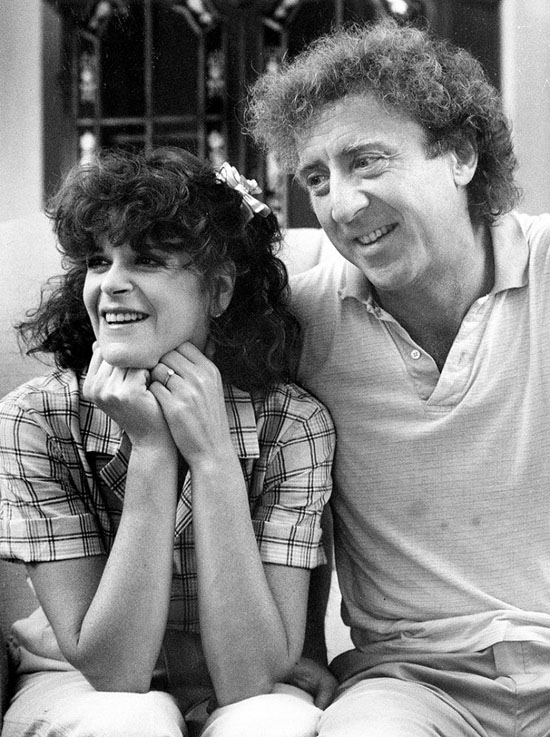 One evening, he recalled in “Kiss Me Like a Stranger,” he and Ms. Radner innocently ended up at his hotel to review some script changes. The time came for her to go; instead, she shoved him down on the bed, jumped on top of him and announced, “I have a plan for fun!” He sent her home anyway — she was married to another man — but before long, they began a relationship.

By his account, Ms. Radner was needy, obsessed with getting married and, once they married in 1984, obsessed with having a child, a project that ended in miscarriage just months before she learned she had ovarian cancer in 1986.

Ms. Radner died in 1989. “I had one great blessing: I was so dumb,” Mr. Wilder once said of her last years. “I believed even three weeks before she died she would make it.”

In memory of Ms. Radner, he helped to found an ovarian cancer detection center in her name, in Los Angeles, and Gilda’s Club, a network of support centers for women with cancer. He also contributed to a book, “Gilda’s Disease” (1998), with Dr. M. Steven Piver.

When asked in an interview whether he thought the public expected him to mourn Radner indefinitely, Wilder said he felt some people did.

Then added, "If you found happiness, real happiness, then it would be stupid to waste your life mourning. And if you asked Gilda, she'd say, don't be a jerk. You know, go out, have fun. Wake up and smell the coffee."

Mr. Wilder himself developed non-Hodgkin’s lymphoma in 1999. With chemotherapy and a stem-cell transplant, he was in remission by 2005.

In 1991 Mr. Wilder married Karen Boyer, a hearing specialist who had coached him in the filming of “See No Evil, Hear No Evil,” in which his character was deaf, and Mr. Pryor’s was blind. She survives him, as does a daughter from an earlier marriage. His sister died in January.

Even before he became ill, Mr. Wilder had begun slowing down. He made his first and last attempt at a television series, the short-lived and little-remembered comedy “Something Wilder,” in 1994.

He returned to the theater in 1997 in a London production of Neil Simon’s “Laughter on the 23rd Floor.” In 1999 he was a writer for two TV movies in which he starred, “Murder in a Small Town” and “The Lady in Question,” playing a theater director turned amateur sleuth. In 2001 he appeared at the Westport Country Playhouse in Connecticut in a program of one-act farces. Shortly after appearing in an episode of “Will & Grace” in 2003 — he won an Emmy for that role — he declared that he had retired from acting for good.

He was by then enjoying a new career as a novelist. His “My French Whore,” published in 2007, was the story of a naïve young American who impersonates a German spy in World War I. (“Just fluff, but sweet fluff,” the novelist Carolyn See wrote in her review in The Washington Post.) It was followed by two more novels, “The Woman Who Wouldn’t” and “Something to Remember You By,” and a story collection, “What Is This Thing Called Love?”

But it was, of course, as an actor that Mr. Wilder left his most lasting mark. In his memoir, he posed a question about his life’s work, then answered it:

“What do actors really want? To be great actors? Yes, but you can’t buy talent, so it’s best to leave the word ‘great’ out of it. I think to be believed, onstage or onscreen, is the one hope that all actors share.”

Wilder died due to complications from Alzheimer's disease, which he struggled with for three years, his nephew Jordan Walker-Pearlman said Wilder chose not to disclose his illness, the statement added.
"He simply couldn't bear the idea of one less smile in the world," Walker-Pearlman said.

“We are the music makers and we are the dreamers of the dreams” - Goodspeed Mr. Wilder as you will be sorely missed.

Gene Wilder in Willy Wonka and the Chocolate Factory (1971)
Posted by Pittsburgh Underground at 11:30 AM