To contact us, send an email to PU@PUzine.com and we'll do our best to respond! 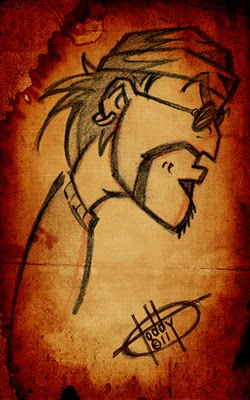 Toddy also lives in an old brick house with high ceilings and a leaky roof. There is also heat and electricity.
Toddy has a zombie. The zombie hangs out with a cochroach. They smoke... I mean, take all his 'meds'. They eat all his food.

They keep him up at all hours of the night. Toddy needs more ‘play’ time and less ‘work’ time. His dreams of artistic satisfaction and cosmic awesomeness have been replaced with cravings for a simple schedule of eat, sleep, poop (not necessarily in that order).

Having an unnatural immunity to religion due to a diet of forced fed formal Catholicism, he graduated with his first Bachelor’s degree in Graphic Design and the naive idea of how he might scar the world with his vision of it.

Instead, after two years of fighting the good fight as an ‘art-mercenary’, he was accidentally hired at the least likely place on the planet - a safety company... a place to hide... a place to hatch his evil schemes...

Fifteen years later, he’s bludgeoned his way to another Bachelor’s degree, this time in Industrial Design, gone through three girlfriends and two mental meltdowns. Now the smartest dumb guy on the planet, he has proven that he can be shot, stabbed, smacked, blown up, burned, back stabbed, pinched, poked, poisoned, pooped on, run over, kicked, clawed, clobbered, kapowed, kablooyed, and kablammed without breaking his stride.

Today, Toddy makes his home in Pittsburgh along side a menagerie of ‘mean little men’, his zombie, the cochroach, and his evil plans of overflowing the world until it’s drowning in absolute and utter silliness.

Hot Toddy can be contacted at: Hot-Toddy@PUzine.com

Chops Huber lives in an old brick house with high ceilings and a leaky roof. There is heat and electricity. He has a cat. The cat is fat, mean, and makes a lot of noise. He needs a haircut. He needs to put his laundry away. His dreams of artistic development and creativity have been replaced by the desire to find a reliable vacuum cleaner and taking a decent bowel movement at least twice a day. 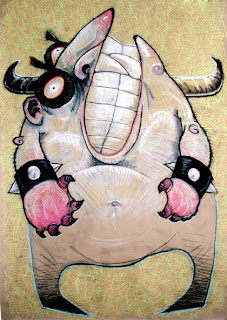 After graduating from Catholic high school, he went to art-college in order to see first hand the Church's definition of evil and perversion.

He is still looking…

…and so traveled west, through Texas and New Mexico. He landed in Los Angeles, and for the low price of his soul and self esteem, he somehow managed to earn a Master's Degree in Illustration.

After running himself over with his car, he traveled to Thailand because he hates curry, lemon grass, and coconut milk. There he was nursed back to health by a group of she-male nurses on a diet of fruit juice, rice, and hand-jobs.

Today, he makes his home in Pittsburgh along side a clan of degenerate trolls. Despite his lack of talent, he continues his futile attempt to make some kind of living with art…

Chops can be contacted at: Chops-Huber@PUzine.com

When Toddy isn't hatching some strange evil schemes or creating crazy mean little men.. (I tried to talk him into a naive stilly girl to offset his zombie, he would have none of it) He is one of the kindest, caring guys in the Universe (shh.... don't let him know I told you that) :-P