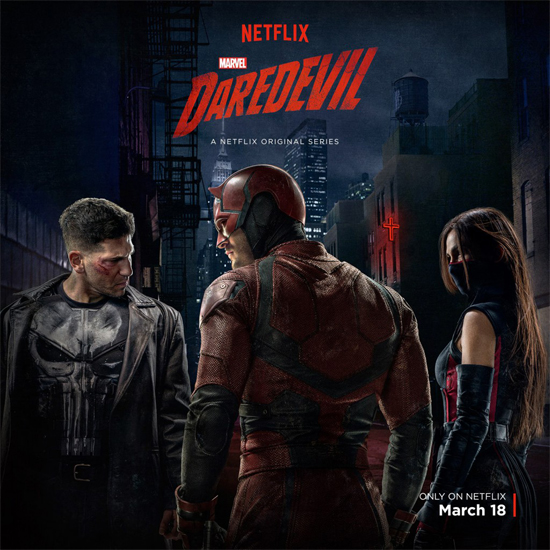 The wait is finally over as one of our favorite Netflix shows is back with a vengeance! Daredevil Season 2 starts tomorrow!!! Check out the trailer below!

Charlie Cox reprises his role as the blind lawyer from Hell's Kitchen, Matt Murdock aka Daredevil, the Man Without Fear in his one man war on crime. Joining his this round will be the first appearances of two Marvel Comic fan favorites Elektra Natchios (Elodie Yung) and Frank Castle aka The Punisher (The Walking Dead's Jon Bernthal). All of Matt's pals will be back as well including Karen Page (Deborah Ann Woll), Foggy Nelson (Elden Henson), Claire Temple (Rosario Dawson), and Stick (Scott Glenn).

The synopsis for season 2 is as follows: Hell's Kitchen has calmed, but it's not out of the fire yet. When an unknown vigilante begins to take the fight to the streets in a big and bloody way, Matt Murdock must don the mask of Daredevil to stop him before innocent people end up in the crossfire. A battle of full measure versus half, a conflict of morality and justice, Daredevil vs The Punisher.

The gang here at Pittsburgh Underground was on the edge of our seats for the first season of Daredevil that premiered last April and can't wait to start binge watching season 2 starting tomorrow!
Posted by Hot Toddy at 11:30 AM