Tits For Telly: Fear The Walking Dead Premieres THIS SUNDAY! 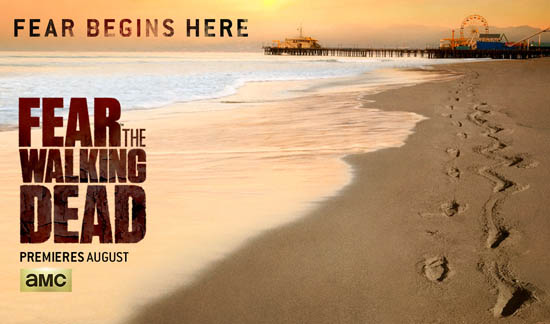 Greetings all you ghouls and fools! Are you getting the itch and twitch for your fill of The Walking Dead? For the original series you'll have to wait until October 11th for the start of season six, but fear not (or fear a little), Fear The Walking Dead, the official spin-off series begins this Sunday, August 23rd! Check out the trailer!

For those who haven't figured it out already, Fear The Walking Dead takes place in Los Angeles at the very beginning of the zombie outbreak giving viewers the 'slow burn' that we didn't receive in the original pilot that time jumped us through the eyes of Rick Grimes as he woke from a coma with the zombie apocalypse in full swing.

This new series will bring us into a bickering, blended family who are forced together in order to survive the oncoming pandemic. This cast brings us Cliff Curtis, Kim Dickens, Alycia Debnam-Carey, Frank Dillane, and Lorenzo James Henrie and is being produced by Walking Dead creator Robert Kirkman.

Is the world big enough for two Walking Dead series? Only time will tell, although most of us can't help but be a little curious as to how the beginnings of humanity's mass exodus started - find out Sunday night 9/8 Central on AMC.


BONUS!!! Check out the Fear The Walking Dead panel from Comicon 2015 hosted by our favorite geek Chris Hardwick!

Fear The Walking Dead Comicon 2015 Panel / Hosted by Chris Hardwick
(courtesy of Flicks and the City)
Posted by Pittsburgh Underground at 11:30 AM