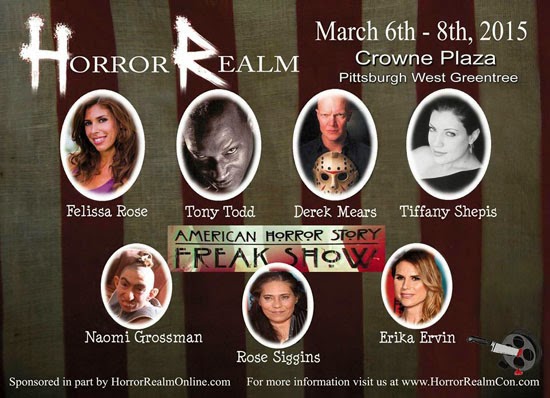 Greetings all you ghouls and fools! Well, believe it or not - spring is in the air (somewhere amongst all those snowflakes!) which means it’s time for the Horror Realm Spring Break Massacre 2015! The eerie event is being held at a new location this year - the Crowne Plaza Pittsburgh West-Green Tree  (401 Holiday Dr, Pittsburgh, Pennsylvania 15220) begins this Friday, March 6th at 5pm and continues on till Sunday, March 8th at 5pm.

Tickets for the event are available at Showclix. Available prices are as follows:

This year, guests include: 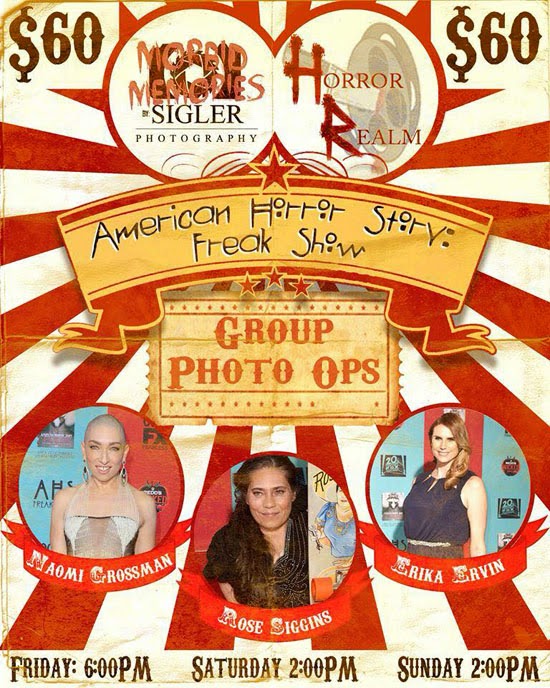 From American Horror Story, appearing courtesy of In Person Productions:


Group photos with American Horror Story: Freak Show cast members Naomi Grossman, Erika Ervin and Rose Siggins are available for purchase. We are pleased to be working with Morbid Memories by Sigler Photography to produce photo ops again. Cost is $60 and includes an 8x10 photo and protective plastic sleeve. Photos will be ready within two (2) hours and can be picked up on site. Photo op times are Friday at 6 PM, Saturday at 2 PM and Sunday at 2 PM.

Purchase your photo op tickets in advance at here.

Photo op rules:
- Please arrive at least 15 minutes before the scheduled time
- No more than two adults per photo.
- Children under 12 can be included in the photo with adults.
- No photos or video with your own camera or camera phone

That’s not all! There a lots of events scheduled (all of which can be viewed on the Official Horror Realm Website), including these highlights:

Panel Discussions:
(Please Note: All panels and events will take place in the Greenery Room.  Convention admission is required) The schedule is as follows:

Friday 3/6:
Saturday 3/7:
Sunday:
Schedule is subject to change at any time.

In addition to the events, the convention offers a large dealer room, celebrity autograph signings, a film program which includes obscure and independent movies, guest & author panels, games and contests round out the event schedule. 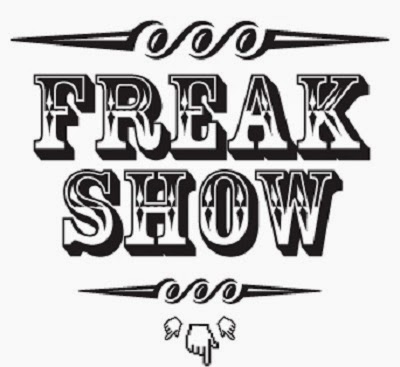 Party with the ladies from AHS: Freak Show - Naomi Grossman, Erika Ervin and Rose Siggins will be joining us. And you know Felissa Rose and Tiffany Shepis will be there too!

Our friends from The Muzik Machine: DJ Service return to provide the tunes for the evening. Get your requests and your dancing shoes ready!

You must register for the contest during convention hours (Friday 5 PM to 10 PM, Saturday 10 AM to 7 PM). No entries will be accepted after 7 PM on Saturday.

There will be a cash bar and photo booth.

Join us - one of us, one of us. The freaks shall inherit the earth.

Actors Workshop to be Offered at Horror Realm
Sean Whalen, a working actor, writer, producer, and acting coach with more than 25 years of experience in Hollywood, will be leading a workshop for actors on Sunday, March 8 at 2 PM.  “Scene Study from a Working Actor’s Perspective” will help participants break down scenes that are selected by Whalen based on their age.  Scenes will be sent to participants in advance of the workshop to allow time for preparation and practice.  Tickets for this unique presentation are $55 and must be purchased in advance prior to 5 PM on Saturday, March 7 at Showclix.   The workshop is open to aspiring actors age 12 and older.  Whalen, who is best known to horror fans from his role in the film “The People Under the Stairs”, will be appearing as a guest at the convention.

College Football Hall of Famer Major Harris to Appear at Horror Realm
Harris, who graduated from Brashear High School then moved on to become one of the greatest quarterbacks in West Virginia University history, was inducted into the College Football Hall of Fame in 2009.  He is a two-time Heisman Trophy nominee, finishing fifth in the voting in 1988 and third in 1989.  Harris is currently an assistant wide receiver coach at North Hills High School.

Harris’s tie to the horror community comes from a role in the 2014 independent film “The Axeman of Henderson County”.  The film was written and directed by the husband and wife team of Larry and Cindy Parmiter of Semi-Charmed Productions, both of whom will also be appearing at Horror Realm.  Larry Parmiter’s synopsis of the film is “a small town is terrorized by an axe-wielding serial killer in this campy, tongue in cheek thriller/comedy”.  Major Harris plays the role of a newspaper editor and is part of a cast that also includes WWE Hall of Fame wrestler “Hacksaw” Jim Duggan.

So grab up your tickets and join the fun at this year’s annual Horror Realm Spring Break Massacre 2015! As always, more information on this event can be found at the Official Horror Realm Website and Facebook page. Hope to see you there!

Awesome - thanks for posting!