Artsy Fartsy: The No Name Players Present SWAN Day 2015 and their Season of Sisterhood 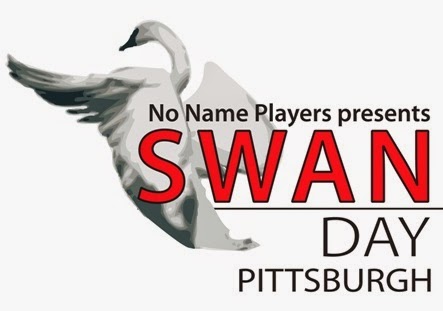 Greetings once again dear viewers as spring has finally sprung! This also means that SWAN Day Pittsburgh 2015 is right around the corner! Brought to the ‘burgh by our friends The No Name Players (Tressa Glover, the Producing Artistic Director and Don DiGiulio, the Artistic Director), the fun begins this Saturday, March 14th at 8PM at the Twentieth Century Club in Oakland.

Now in it’s seventh year, SWAN Day Pittsburgh invites you to honor the power of women artists and their work. It will feature WORLD PREMIERE works by local female MUSICIANS, CHOREOGRAPHERS, THEATRE ARTISTS, FILMMAKERS, VISUAL ARTISTS, LIVE PAINTERS and more.  No Name Players has asked participating SWAN Day Pittsburgh 2015 artists to submit works using this idea as inspiration: “Everyone has an untold story hidden behind closed doors. Try to understand that people are not always as they first seem.”

There is no other event in Pittsburgh that showcases world premiere works by local women artists from so many disciplines.  Please join us as we do our part to honor the power of women artists and their work.

Tickets for SWAN Day Pittsburgh 2015 are available online at ShowClix and are priced at $25 presale and $30 at the door. Student tix are $10 at the door with a valid ID.

That’s not all! The No Name Players are incredibly busy with their Season of Sisterhood, bringing you the best in live local theater! This not only includes the original live monthly sitcom at the Arcade Comedy Theater entitled The Sister’s Sorella (written and performed by Tressa Glover, Julianne Avolio and Maggie Carr) taking place now through June 20th, but also the Pittsburgh Premiere of Brewed by Scott T. Barsotti starting June 25th through July 11th at Off The Wall Theater.

Check out this great clip of Tressa Glover as she joins host Brian Edward of ‘Burgh Vivant for cocktails at the Arcade Comedy Theater to talk about the No Name Player’s and their upcoming season!

Monthly installments of The Sisters Sorella will be coming your way throughout 2015.  These premiere events will also include music, live commercial breaks and more! Purchase tickets at Showclix for $10.00.

Also, coming on June 26th through July 11th at Off The Wall Theater is the Pittsburgh premiere of Brewed by Scott T. Barsotti & directed by Steven Wilson.

The task is stirring a pot...all day, every day.  The sisters don't share it as they once did. Paulette is fed up; Collette is clueless; and crippled Babette is volatile.  Juliette does her best to maintain order and civility...for now.  When Roxette brings her new girlfriend home and calls everyone together, old grievances flare setting into motion an impossible moral struggle.  Where else can fights go when you already use your fists?

Tickets will be sold at a future date so stay tuned to Pittsburgh Underground for more info! Also, don’t forget to check out the Official No Name Players Website for more information about all the great events from our favorite wife / husband team of Tressa Glover and Don DiGiulio and the entire gang at The No Name Players!