Comics To Rot Your Brain: Batman Week - Day 4 / Bat Out of Hell 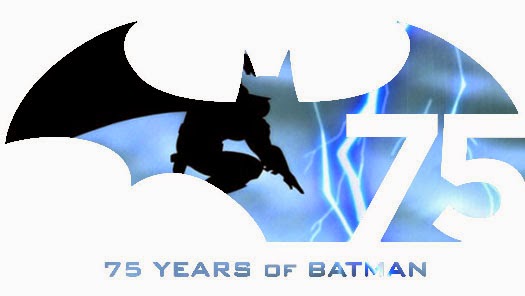 Welcome back kids to Day 4 of Batman Week here at Pittsburgh Underground! From Batman’s dark origins, to practically being destroyed by ‘well intentioned’ adults of the 1950’s, to the campy fallout of the 1960’s, the Batman has flow through some fairly bumpy currents throughout his fabled past.

Comic book greats such as Neil Adams, Carmine Infantino, and Denny O’Neil did their very best to keep the Dark Knight on course in the best manner they could throughout the 1970’s, creating some of the most memorable moments in the Caped Crusader’s career. Like a bat out of hell, the 1980’s finally gave the Batman an opportunity to escape the light and sunny chains of the self imposed Comics Code Authority, delivering him back to his shadowy roots as the Dark Knight Detective.

Dennis O’Neil, famed editor of Batman and Detective Comics, had returned back to his old stomping grounds at Marvel Comics to take on scripting (and eventually, editing) duties with The Amazing Spider-Man, Iron Man, most notably - Daredevil who, much like Batman had been floundering, until O’Neil brought in a relatively unknown artist and writer named Frank Miller to save what was then considered a second-tier character, turning him into one of Marvel’s most popular heroes.

CLICK TO CONTINUE TO
BATMAN / BAT OUT OF HELL...

While relationships were being formed by Dennis O’Neil and Frank Miller at Marvel, the gang at DC Comics, were desperate and doing anything they could for viewership. Sales were on the constant downswing and desperate measures needed to be taken. 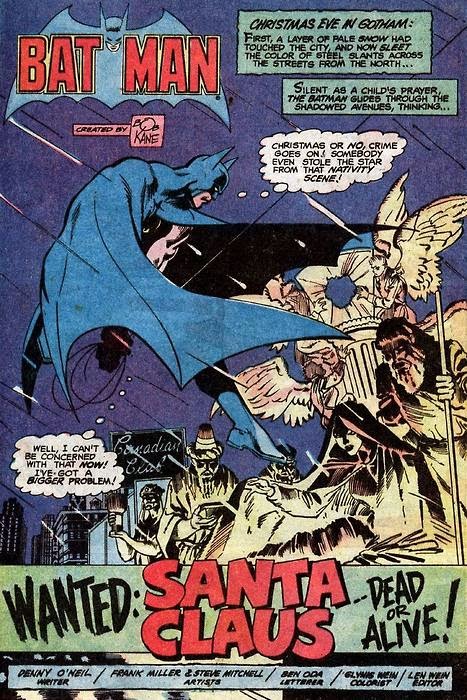 Eventually, Dennis O’Neil moved back to DC Comics, and with it collaborated with his friend Frank Miller on a Christmas short story entitled, Wanted: Santa Claus - Dead or Alive in 1980, which led Miller to the Batman book that changed everything, not only for Batman, but for the comic book industry forever. 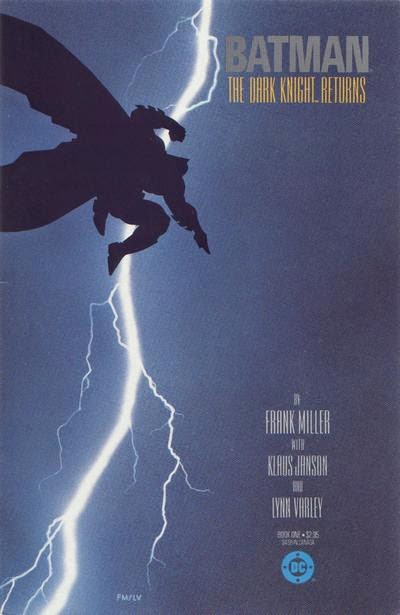 In 1986, Batman: The Dark Knight Returns was published in a format never before seen in comics. Printed on quality paperstock and bound like an actual book as opposed to the newsprint and staples of yesteryear, the graphic novel was born. Written and drawn by Miller, inked by Klaus Janson and colored by Lynn Varley, fans of the caped crusader witnessed beaten and battered Bruce Wayne coming out of retirement (a result of the mysterious, yet undisclosed, death of Jason Todd, the second boy wonder) at age 55, taking on the mantel of the Batman once more. This adult take on comics, the attention to how it was printed, and the reinvention of the super hero genre changed not only the course for Batman, but the comic book industry with the birth of the graphic novel. 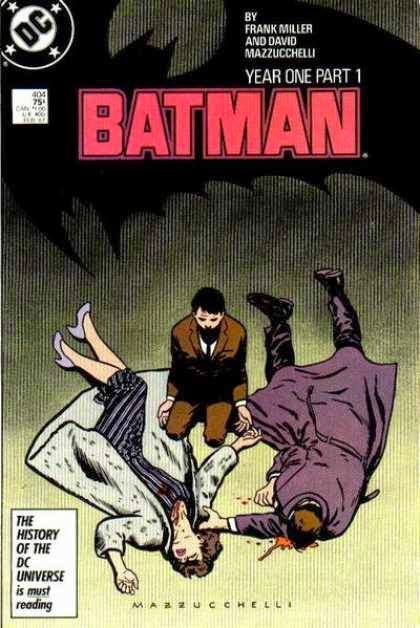 Following Batman: The Dark Knight Returns came the next seminal moment in Batman comics. Batman: Year One chronicled the Dark Knights first year as a crime fighter, and Commissioner Gordon’s first year as part of the Gotham PD. Written by Frank Miller and illustrator by David Mazzucchelli, it took the Batman origin story to new depths from the very beginning, showing flashbacks of the Wayne murders, to the internal corruption of the Gotham PD and the Falcone Mob that runs it. It is at this moment in time that we see the fledgling partnership between both Jim Gordon and Batman as they take down the corrupt Commissioner Gillian Loeb and Carmine “The Roman’ Falcone. We even get to see a young Selina Kyle (aka Catwoman) as she transforms from prostitute to anti-hero. This story has become a guiding force in the Batman franchise and even ends in the same way Christopher Nolan’s ‘Batman Begins’ does with the newly appointed Commissioner Gordon handing over the ‘calling card’ of the next big thing in town to Batman - a lone playing card with a Joker’s face printed on one side. 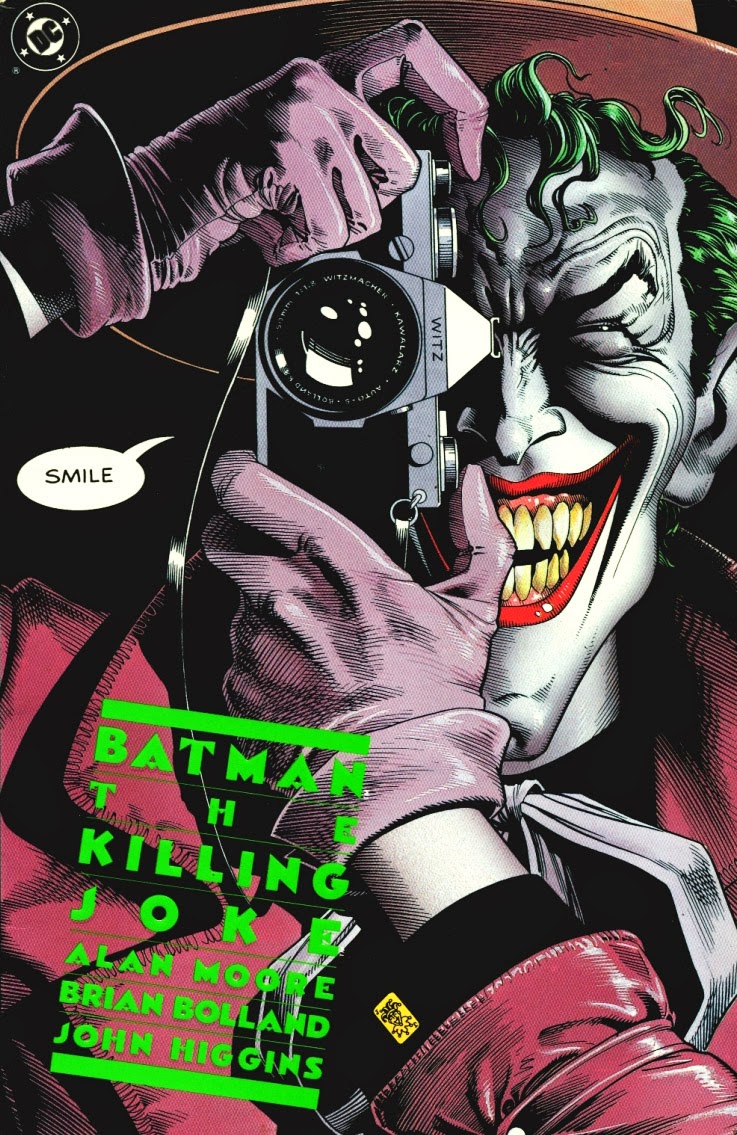 In March of 1988, DC Comics finally unveiled the harrowed tale of the Joker’s origins in
Batman: The Killing Joke written by comic book curmudgeon Alan Moore and artist Brian Bolland (also edited by O’Neil). In flashbacks, an unnamed employee of the Ace Chemical plant, turned failed comedian is duped by the ‘Red Hood Gang’ to not only wear the gimicky ‘red hood’ in order to guide them through the plant in order to rob the card company next door, but is told by the police during before the night of the heist that his pregnant wife has died in an unexpected household accident. The grief stricken, and still unnamed, man goes on with the plan only to be confronted by the Batman during the failed robbery attempt, only to jump into chemical tank that turns his skin white, hair green, his lips ruby red, and his sanity permanently lost. The Joker is born.

Of course, the flashback style of story telling all takes place in modern day as the Joker not only kidnaps Commissioner Gordon, but shoots, cripples, and then photographs his daughter Barbara (aka Batgirl) in an attempt to show him that all it takes is one bad day. 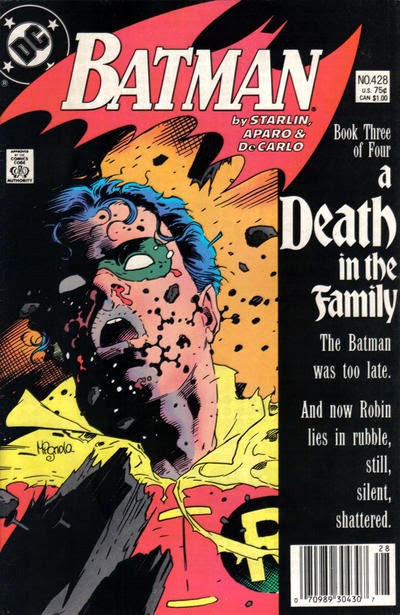 We also got Batman: A Death in The Family in late 1988 were a 900 number was created (try and remember, the internet wasn’t much of a ‘thing’ in 1988), allowing readers to vote on whether or not Jason Todd (the infamous, second Boy Wonder created by Gerry Conway and Don Newton) would die at the hands of the Joker. Remember, at this point in history, the first Robin, Dick Grayson, has grown up to become a hero in his own right - Nightwing, leading the Teen Titans. Written by Jim Starling and illustrated by Jim Aparo, the resulting votes cast 5,343 to 5,271 in favor of 86ing Jason Todd - and so it was, one of the dark days in Batman history (although not forever as Jason Todd resurfaced in 2005 as the second Red Hood, the first, being the Joker before becoming, well... the Joker).

Join us again tomorrow kids here at Pittsburgh Underground for the Batman's foray onto the big and small screens during the late 80's to present!
Posted by Hot Toddy at 7:30 AM