Comics To Rot Your Brain: Batman Week Begins At PU!!!

Holy Dodranscentennial!!! It’s Batman’s 75th Anniversary!!! Commemorating the event, the gang at DC Comics has proclaimed that this Wednesday (July 23, 2014) as Batman Day, partnering with comic book shops, libraries, and book stores for special celebrations including a FREE issue of Detective Comics #27! Of course this year’s San Diego Comicon (which starts Thursday, July 24th until July 27th) will feature the ‘Cape/Cowl/Create’ exhibit featuring contemporary artists painting on a cape and cowl designed by Asher Levine and based on the Batsuit in the new Batman: Arkham Knight videogame that comes out later this year on PC and gaming consoles.

The gang here at Pittsburgh Underground is celebrating all week with a brief history of the Bat's 75 years of fighting the good fight. So what better place than to start at the very beginning. 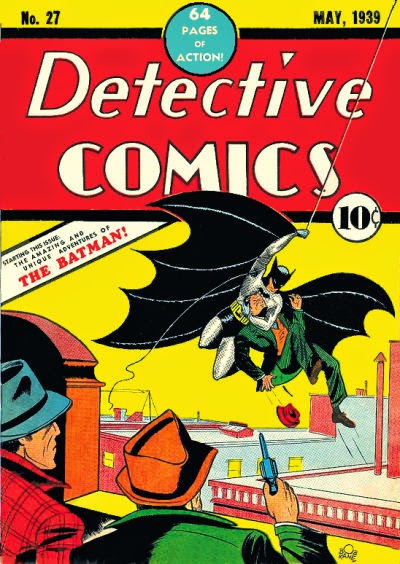 The First Appearance of The Batman
Detective Comics #27 / May, 1939

Batman has been my favorite DC comics character for as long as I can remember. We grew up together (Bruce, the big brother I never had, and me, the incredibly bored adolescent who pissed off his father as I tried to dig Batcave in the backyard (hey, can anyone really blame me? Who doesn’t want their own Batcave!).

For many of us comic book collectors, Batman was and remains one of the most important literary characters tucked away in our stash of plastic bags and cardboard boxes. Constantly changing with the times from his dark and tragic origins, to the campy,  swinging 60’s, and then around again full circle to the broody moody avenger we all know and love, the man in the cape and cowl remains as timeless as ever with a version for everyone - fresh faced kids, cynical teenagers, and world weary adults alike. 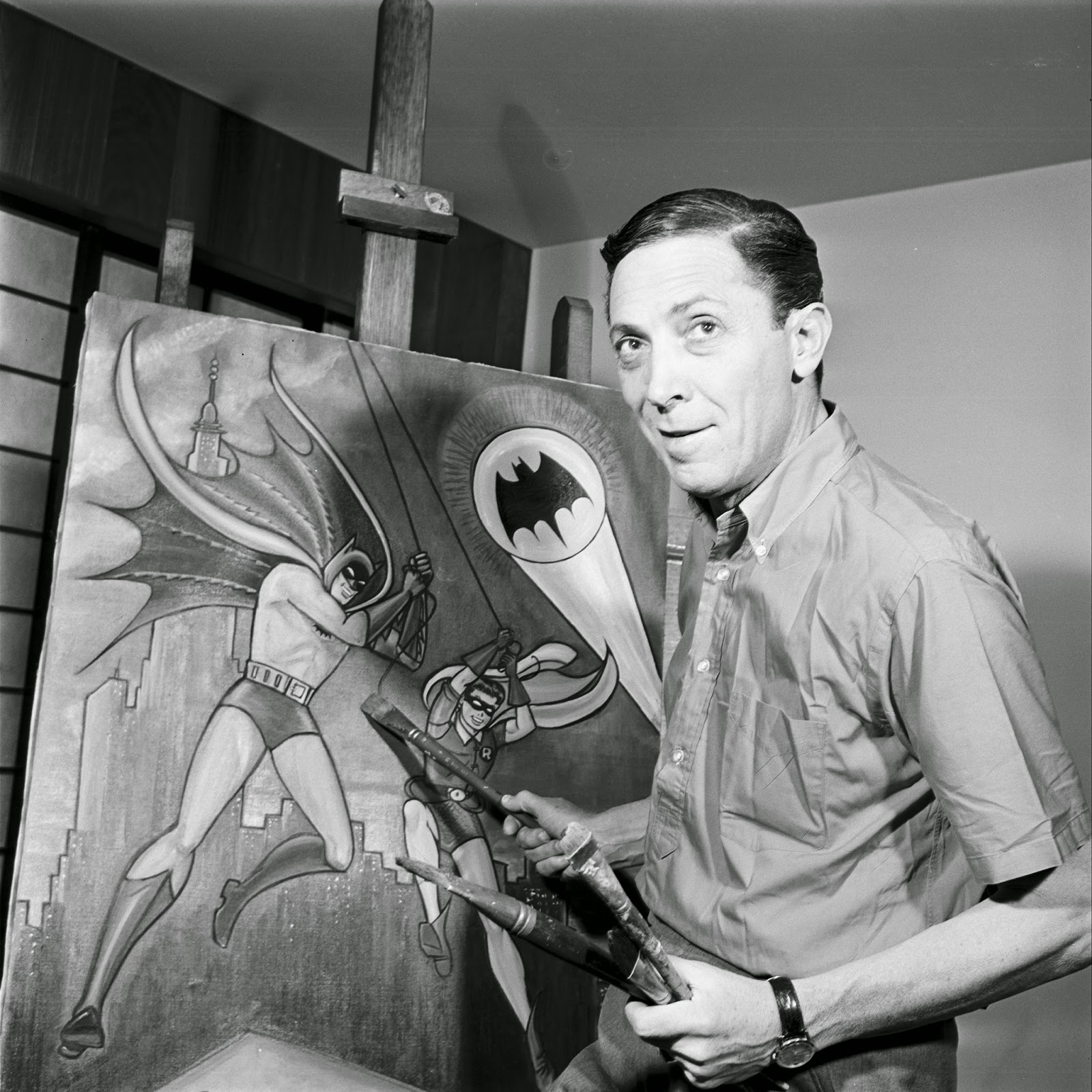 Bob Kane, creator of The Batman

Created by Bob Kane and Bill Finger as a response to the success of Superman’s success in Action Comics earlier in 1939, Batman was created as Superman’s polar opposite of bright colors and cheery heroics by combining inspiration from Leonardo Da Vinci’s sketch of an ornithopter, the films ‘The Mark of Zorro’  and ‘The Bat Whispers’, and other popular pulp detectives of the 1930’s such as the Phantom, Dick Tracy, and even the literary hero Sherlock Holmes. The alchemy worked giving us the Bruce Wayne / Batman persona. 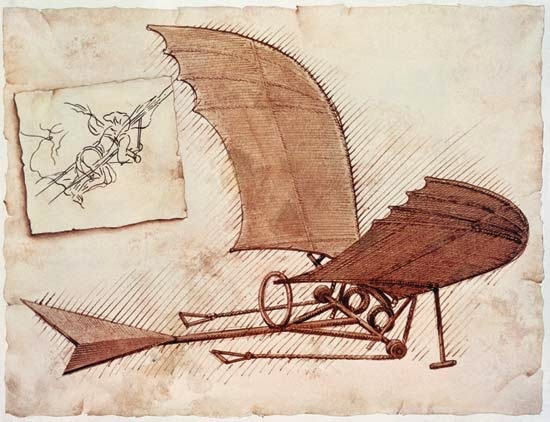 First appearing in Detective Comics #27 in May 1939, the Bat-Man’s story has been told countless times in many different ways, however the origin (like all great origin stories) written by often overlooked co-creator, Bill Finger, remains pretty much as it always has. While traversing through Crime Alley, wealthy Gothamites Thomas and Martha Wayne are gunned down by a two-bit thug during a robbery attempt in front of their traumatized young son, Bruce who vows to avenge his parents murder by becoming the thing all criminals fear most.

Although starting out in true pulp form by battling gangsters, crooks, and nameless thugs, it wasn’t until contributing creators Jerry Robinson and Dick Sprang joined Kane and Finger in 1940 that many elements of Batman started taking shape. Batman’s utility belt, the Batarang, the Batplane (thankfully renamed the Batwing in more modern incarnations), and everyone’s favorite ride, the Batmobile.

It wasn’t until the ‘softening’ of Detective Comics #48 in April, 1940 that Finger invented a ‘Watson’ to Batman’s ‘Sherlock’ in the guise of Robin the Boy Wonder which nearly doubled sales and started the kid sidekick shtick of the 40’s (Green Arrow had Speedy, The Flash had Kid Flash, Captain America had Bucky, and the list goes on from there). 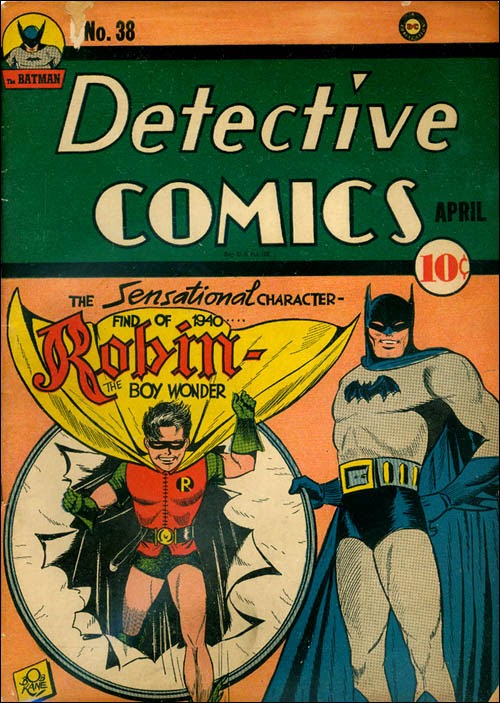 When Batman finally received his own solo spin-off from Detective Comics in May 1939 simply titled, Batman, that the birth of the best villains in comic book history were born. Joker and Catwoman were the beginning of what us loyal Batman readers have come to love as Batman’s rogues gallery - many of them merely shadowy reflections of Bruce Wayne’s own fractured personality.

These worst of the worst made their appearances in both Batman and Detective comics throughout the golden age of comics during the 1940’s - The Penguin, Professor Hugo Strange, The Mad Hatter, Tweedledum and Tweedledee, The Riddler, The Scarecrow, Solomon Grundy, and Two-Face ushered in decades of madness to come for the Caped Crusader. 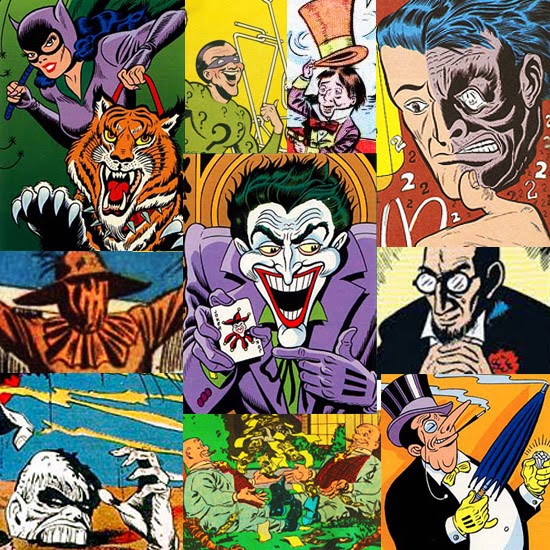 TOMORROW!!! Pittsburgh Underground continues our celebration of Batman Week as we enter some turbulent times for the Caped Crusader and the Boy Wonder - The 1950's and 1960's!!! So stay tuned - SAME BAT TIME, SAME BAT CHANNEL!!!
Posted by Hot Toddy at 11:30 AM