Artsy Fartsy: The Rage of the Stage Players Presents The Picture Of Dorian Gray THIS FRIDAY!!! 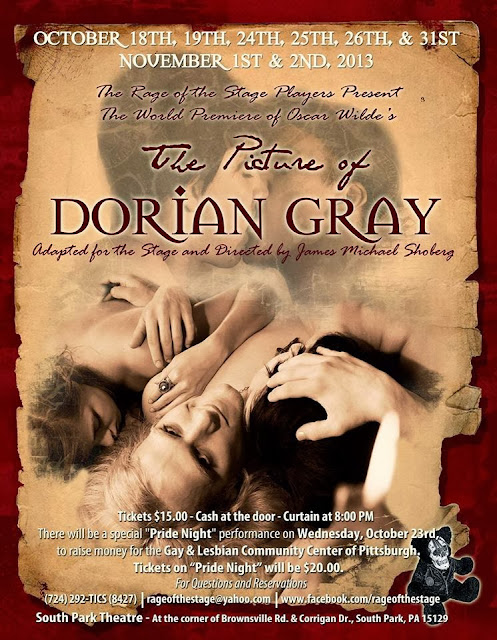 This faithful adaptation, written and directed by award-winning Pittsburgh playwright James Michael Shoberg, has been drawn from both the censored 1890 and extended 1891 versions of Oscar Wilde’s only novel, and will expose audiences to Wilde's tale as we believe he would have wanted them to experience it.

“Dorian Gray, a young man of incomparable personal beauty, becomes the subject of a painting by an artist so enthralled by his splendor that he develops an idolatrous worship of him. However, upon a chance meeting with the manipulative Lord Henry Wotton, Dorian becomes painfully aware of the fleeting nature of his good looks. Espousing a “new hedonism,” Lord Henry suggests the only things that make life worthwhile are youth and pleasure. Dorian, imbued with a newfound sense of vanity, laments the thought that his portrait will mock him throughout his fading years, and expresses a willingness to sell his soul in exchange for the portrait to age in his stead. When his mad wish is fulfilled, he begins to pursue a life of debauchery, his face untouched by time, and his painted image, now locked away from prying eyes, grows more monstrous with every unspeakable sin he commits.”

But naturally, the production is not without a trademark “Rage-twist.” The story has been visually reimagined in the “steampunk style,” which will be reflected in the sets by Assistant Director and Set Designer, Jen James, as well as the costumes, designed by Beth Shari. And that's only the beginning! The breathtaking original portraiture, by fantasy and horror illustrator Kari Christensen of Manhattan, will change before the audiences eyes, as they follow Dorian's descent into vice and sin!

"THE PICTURE OF DORIAN GRAY"

STARRING (In order of Appearance)

There will be a special “PRIDE NIGHT” performance on WEDNESDAY, OCTOBER 23rd, to benefit the GLCC (Gay and Lesbian Community Center of Pittsburgh). Tickets on “PRIDE NIGHT” will be $20.00.

Adult content and partial nudity.
Posted by Pittsburgh Underground at 11:30 AM