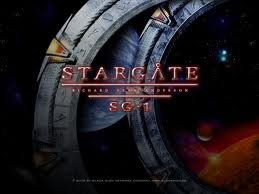 Those of you who love ‘Gate respond, “OK, the movie or the series and which franchise?” Down boys and girls. We’ll get there.

A year or so ago, the hubby and I decided to watch the entire run of both Stargate SG-1 (11-year run) and Stargate Atlantis (5-year run), in order as they were meant to be seen, commercial-free courtesy of our Netflix subscription. Yes, it took months and was well worth the time spent. The resulting couch impressions are permanent.

How much better does episodic, serialized (mostly) TV get than Stargate? Characters that became more endearing over time….smart, funny writing, delicious plot twists, tremendous production value, all good things that left us wishing that it would all never, ever end. I pose these musings to those who care about Stargate just as much. 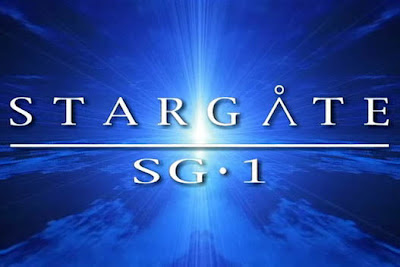 Stargate SG-1 Opening Titles
Stargate SG-1
Jack O’Neill. We assume that our favorite irreverent smartass managed to piss off even more uptight higher-up military folk. So how long did he put up with the whole General O’Neill thing before fishing 24/7 became too tempting? Give us that deceptively vacant stare one more time.

Samantha. Did she reach the rank of general as well, finally get together with O’Neill, marry and raise a family? We vote for all of the above. You go girl.

Teal’c. We’d love to see his dreams of a free and united Jaffa become reality. Otherwise, did he remarry and find satisfaction in his personal life? Did he even have a personal life? Keep the hair, bucco. Indeed.

Daniel and Vala. We can only hope that the happiness they found together in Unending and then had wiped from memory came to pass again. It’s only right.

Cam Mitchell. He was on his way as a great SG team leader, but did he find a nice girl too? Was he instead killed in action when the law of averages caught up with him after many fearless/reckless moves? Nahhhh…

General Landry. His career’s unquestioned, but did he reconcile with very pretty estranged Kim? We hope so. They seemed right together. And speaking of generals, good call in renaming air ship Phoenix after the late General Hammond. How cool was that?

Walter. How about some respect, or at least something more interesting to do? Let’s hope that he got a whiz-bang Asgard-style computer instead of that old clunker.

President Hayes. The rare common sense, voice of reason president…did he remain so in the long run? Kicking Kinsey to the curb was an excellent start.

Ex-VP Kinsey. Disgraced as a politician (isn’t that redundant somehow?), perhaps he found a new calling as a black market arms trader. Then again, he was probably already there.

Harry Maybourne. Our favorite not-really-reformed character. Diabolical, underhanded, with no moral conscience but nevertheless admirable, perhaps he remained king of a small, undeveloped alien nation. Such seems too calm a destiny for Maybourne.

Frank Simmons. Best and most well-deserved character kill-off…or did he manage to find a way out of that end as well? Blown out an airlock ain’t an easy stunt to thwart.

C.I.A. Operative Burke. An obscure but highly memorable character. Burke has the distinction of getting perhaps the funniest line in all of Stargate when describing his ideal C.I.A. posting, “a temperate climate with fine-looking women who put out like a broken candy machine.” 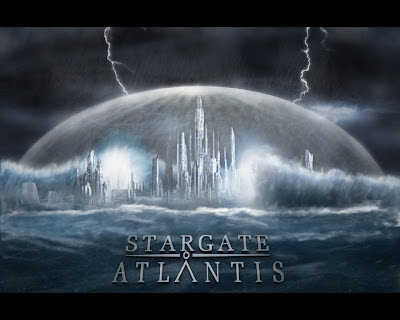 Stargate Atlantis
John Sheppard. A military leader perhaps on par with O’Neill. Did he tame his sometimes-roughish ways to become a general? Needs to meet a nice girl—perhaps a fixup with General Landry’s daughter. Let’s get out of here and listen to some Johnny Cash.

Teyla Emmagan. A natural leader and righteous tough chick with a heart of gold. She, K’naan and double-dose DNA pipsqueak Torin should have found a nice hut in the ‘burbs by now. A singing gig isn’t out of the question, either. Awesome that she kicked wraith Michael off the tower. Good riddance.

Ronon Dex. Our dreadlocked dude kept his line of work by becoming the latest Conan the Barbarian…how perfect. We suspect that that he and cute kick boxer Amelia got it on. Later she took him clothes shopping, and about freakin’ time too.

Rodney and Jennifer. We’ve know that they’re in love…for quite some time now. The question is if Rodney eventually drove her so nuts that she lopped off his.

Zelenka. A patient, thoughtful man, but we’ve all got our line in the sand. No one would mouth off if he eventually sucker-punched McKay.

Elizabeth Weir. Last we saw, she floated peacefully in space as a slowly dissolving mass of nannites. Let’s hope that she didn’t feel a thing.

Mr. Woolsey. An unlikely leader who won us over, however the SG Atlantis uniform never really suited him as well as a nicely-tailored suit. Needs to meet a real nice girl, not one conjured up by his subconscious.

Carson Beckett. Or someone like him. Did stasis do the trick? We miss that Scottish accent big time.

Wraith Todd. He revealed an odd penchant for poetry that was simultaneously creepy and charming. Give us more.

Stargate Universe
So what of SGU, you ask…its untimely demise at least brought a graceful final episode. It’s too soon after its end for analysis just yet. Perhaps the crew in stasis missed another flyby of Colonel Telford partying with those crusty aliens on their seed (seedy?) alien ship. We do assume however, that Eli figgered out how to preserve his own brilliant self in addition to the rest of the crew, and that the next galaxy in the neighborhood is a bit friendlier.

There were many minor players of course, but these characters jump out as the most memorable. We want to know these things! We care! They MADE us care! So what now? Nuthin’ other than what we already do and we’ll have to be OK with that. Open the iris!
Posted by Anonymous at 11:30 AM

Welcome to the blogosphere, Yerz. Maybe next time you'll write about something with which I have a nodding acquaintance so I can write something halfway intelligent in response. Until then, sayonara. I look forward to being amused by you at PU.