Artsy Fartsy: The Nervous One - PU Poetry by Yerz Trooley 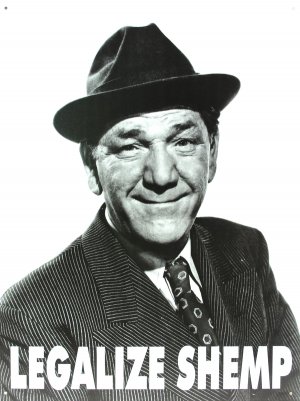 The Nervous One
Shemp always was the nervous one of those three Howard brothers
Along with help from Mr. Fine, all sons of Jewish mothers.
We knew that Shemp was gearing up for some hard luck affair
When in his face the strands would fall of long, black greasy hair.

His beady eyes would peer out from beneath a dark chapeau
With just a trace of a thin smile that seemed so apropos.
His cheap striped suit and tacky tie made him look a normal fellow
Until that nervous tick appeared which turned his knees to jello.

Who knew he'd been the first real Stooge, preceding Moe and Larry
But left to join another act and dumped that shnook Ted Healy.
Moe called their brother Curly to leave home and join the crew
Plus Larry Fine (hey porcupine!) and Shemp bid them adieu.

When Curly had to leave the act, his brother Shemp replaced him
And forged his own identity amidst the Stooges mayhem.
His hands and voice would shake and crack, he'd throw a frantic glance,
Then throw a pie and poke an eye and sing a song of six pants.

Then late one night while out with friends, while leaving a horse race
He left us suddenly one night, a smile upon his face.
His repertoire of wacky shtick that had him all undone
Leaves us the comic legacy of Shemp the nervous one.