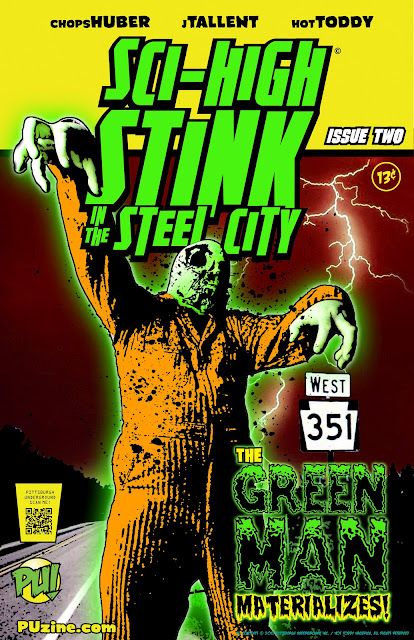 Hey, Hey, Hey!!! Welcome one and all to the end of March! That means only one thing - a FREE PU Pulp Poster!!! This month we decided to let our regular artistic savant, Chops Huber, take a little break from his scribblin' duties and let me (Hot Toddy) take a wild stab Sci High Stink In The Steel City / Issue 2 - The Green Man Materializes!  (Click Here To Continue...)


UPDATE: This PU Pulp Poster has been UPDATED as of August 3rd, 2012 to include revisions to our QR Code and Website Address - PUzine.com -  Download and print this PU Freebie and hang it on your fridge, stick it to your skateboard, glue it to your little sister's head - THEN use your smartphone to scan the code to follow Pittsburgh Underground wherever you are!


CLICK HERE TO CONTINUE WITH:
More On the Local Legend of the Green Man That Inspired This Months PU PULP POSTER...

Continued...
For those of you not from Pittsburgh, PA - the Green Man is a local urban legend based on the existence of real life Green Man, Raymond Robinson (aka No Face Charlie) who at 8 years old was injured by an electrical line on the Morado Bridge, outside of Beaver Falls while attempting to view a bird's nest. The bridge carried a local trolley that used electrical lines of both 1,200 bolts and 22,000 volts which had killed another boy less than a year earlier. Although he wasn't expected to survive, Robinson did although he was badly scarred (with stories of his skin turning a shade of green), losing both eyes, nose, one ear, and an arm.

Living in Koppel, PA an adult Raymond would mostly get out at night (due to his appearance), taking long walks along State Route 351. Groups of locals would regularly gather to search for him while on his walks, sometimes even meeting him to exchange cigarettes and beer for photographs with him.  Raymond was also struck by cars more than once during his night walks and eventually retired to the Beaver County Geriatric Center where he died in 1985.

Mr. Robinson did become a local myth in the Pittsburgh region with his real story obscured by urban legend. Everything from being a power company employee who was hit by downed power lines to a man struck by lighting.

I like to think of Charlie Robinson to be something of a hero - a scarred man who didn't quit regardless of the deal life gave him. Some people might have thought of Mr. Robinson as a monster, many people turned him into a myth - I what makes him most interesting is that he was just a man that kept on keepin' on (even when he might not have wanted to). Here's to you Mr. Robinson and for greener pastures in the next life!

Don't forget to join us again soon for another PU Pulp Poster, exclusively and FREE here at Pittsburgh Underground! Also, a BIG THANK YOU to one of PU's biggest supporters - JTallent for all his help in capturing my version of the Green Man for this month's poster (THANKS JT!!!).

Posted by Anonymous at 6:31 PM