PU it Stinks!: Government Censorship of Your Internet 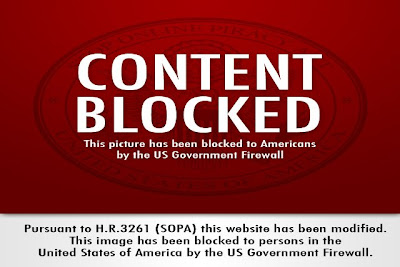 Greetings users! The gang here at Pittsburgh Underground does our best to stay out of the political spectrum if at all possible, but there are times when the whirlpool of disaster known as Congress can't help but suck PU toward their gravitational pull of doom.

With that said -  if you're an avid internet user, can't go a day without your Facebook or Twitter, and are a Wikipedia or Google addict, then you are most likely aware of the big blackout today in response to the geniuses in Congress who are attempting to make our life on the information super highway a lot less super.

Basically, there are two bills before Congress right now known as the Protect IP Act (PIPA) and the Stop Online Privacy Act (SPOA) that would censor the net to a former shell of what it is now. Both bills would employ similar methods of censorship that are already imposed in China, including search engines that would be forced to delete entire websites from their search results.

In a word - it's the usual bag of dicks that our government wants to force us to swallow.

Fear not programs! Our saviors from Google have stepped up today with an easy way to give the electronic high hard one to Big Brother in the form of a quick petition that will be presented to the boobs that run our country before they vote on these insipid new rules on January 24th, 2012. To jump on the big FU to Congress train, check out Google's End Piracy, Not Liberty Campaign and sign up today!

Google is up for the right to fight for your civil liberties, even President Obama digs the cause, and you know that the gang here at good ol' PU will go in swinging until the last bad idea goes down with a thud! Show those congressional cock-smokers that you will not be silenced and that quiet frankly...

Posted by Pittsburgh Underground at 1:00 PM