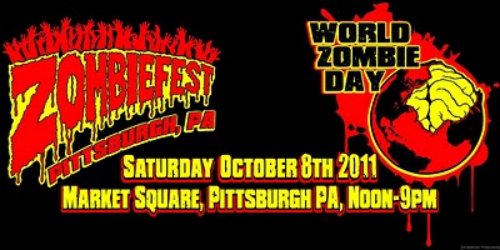 YAAAAHH!!! It's Pittsburgh Underground's favorite month of the year - OCTOBER!!! With that said, it's time for all the ghastly and ghoulish to crawl from their crypts and join in on all the bloody fun of World Zombie Day 2011 created by Pittsburgh's own Professor Emcee Square (aka Mark Menold)  from the It's Alive Show!

To say this meeting of the post-mortem is HUGE would be an understatement. In it's fifth year, this rain or shine FREE event will bring creeps and cannibals from all over the region to converse on Market Square this year on Saturday, October 8th from noon to 9PM to claim the Guinness World Record for "Largest Gathering of Zombies"! 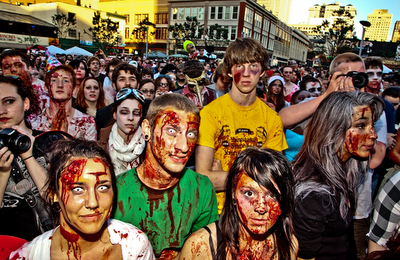 This means we want you to register for the event! It won't take long, and it GUARANTEE'S Pittsburgh its rightful place as the Zombie Capital of the World! For those boys and ghouls planning to attend, fill out the World Zombie Day Registration Form and bring it with you to hand off in the Express Lane as soon as you get there! WE WANT TO WIN!!! (Don't worry, if you're not 'zombified' upon arrival, there will be volunteer artists to get you into the spirit of things!).

That's right gang - this is a WORLDWIDE event meaning we are actually competing with other cities across the globe! From Adelaide, Australia to Worcester, England - the entire world is out to best Pittsburgh as the Zombie Capital of the World (which we all know isn't the case - Pittsburgh is the birthplace of the zombie!). Don't believe us? Check out the Official World Zombie Day Site for more info on the global mayhem!

ZombieFest 2010 Announcement Courtesy of The It's Alive Show


Now you're probably asking yourself, what makes Pittsburgh's World Zombie Day event so special? Pittsburgher's have the biggest hearts of any in America and to prove it our World Zombie Day will also be taking charitable donations for the Greater Pittsburgh Community Food Bank. That's right my zombie minions - if you want to eat the brains and flesh of the living, you'll need to fatten them up first! That means bringing few of your non-perishable food items along with you (hey, your undead - you won't be needed them anyway right?!).

This day is going to be PACKED full of great things to do!  During the day, attendees can peruse over 30 vendors and enjoy entertainment such as celebrity guest appearances and a special performance from our friends from A Night in Quarantine: The Zombie Opera.

Seven bands will be performing including local favorites Deathmobile (from the It's Alive Show) and Juggernaut from New York. Also, attendees can take part in crowd participation activities like the “Zombie Olympics” (a hilarious slow motion sporting event), a brain eating contest (brains molded from sugar-free jello) and an Ugly Pageant (crowning a Zombie King and Queen for best zombie make up).

The crowd will also treated to a live taping of The It's Alive Show to be broadcast as a telethon this Halloween on WBGN in Pittsburgh. The day will culminate in "The Walk of the Dead", when all the participants are led in a shambling parade around the city, all the while staying in character as groaning zombies. With thousands in attendance, this spectacle recreates the scenes from the original zombie film classics on a grand scale.Check out the World Zombie Day 2011 Full Listing of Events for more information.

Stay tuned my rotting and realing! We have more information coming THIS WEEK on the Pittsburgh's World Zombie Day!

AND for those of you who are curious about last year's event and were too scared to attend (aw... are you afraid of the 'ittle zombies!) Click Below to check out some spooktacular video from the 2010 World Zombie Day!

Pittsburgh Zombies Playing with Their Food