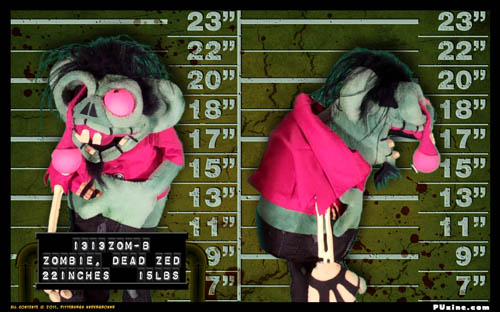 Dead Zed Zombie CAPTURED After 8 Months On The Run

Happy Halloween gang!!! It's Pittsburgh Underground's FAVORITE DAY OF THE YEAR!!!! And what a year it was!!! Hell! What a weekend it was!!! After eight long months of searching, Dead Zed Zombie was finally cornered at of all places, some spooky carnival that literally just materialized in what some are describing as 'parts unknown' by none other than the undead ringmaster himself, Barnabas Bailey.

As you can see by the photos that were sent in, Zed looks, well... let's face it kids, he looks like crap.

It won't  take the gang here at Pittsburgh Underground long to secure Zed and bring him back to the sewers so HANG TIGHT - We will have another report in exactly 1 HOUR (that's right around 12:30 gang!) to give you the scoop on whether or not Dead Zed will air tonight for his anniversary show which will also start our Season 2 Episodes...
Posted by Pittsburgh Underground at 11:30 AM