Movies That Have Everything: Professor Marston and the Wonder Women STARTS TODAY!!! 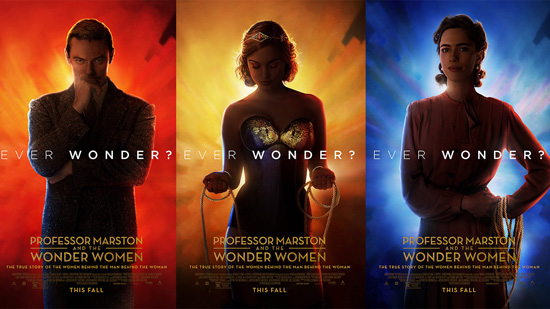 All things Wonder Woman continues with the opening of Professor Marston and the Wonder Women. Check out the trailer below!

This tale written and directed by Angela Robinson stars Luke Evans as Professor William Moulton Marston (taking the pen name of Charles Moulton), the psychologist, inventor, and creator of Wonder Woman and the two women that inspired the character - his wife Elizabeth (Rebecca Hall) and their 'extended' relationship with Olive Byrne (Bella Heathcote).

In a 1940’s interview conducted by Olive Byrne (under the pseudonym Olive Richard) that was published in Family Circle (titled ‘Don’t Laugh at the Comics), Marston spoke of “the great education potential” in comic books which caught the attention of comics publisher Max Gaines who hired him as an educational consultant for National Periodicals and All-American Publications which would eventually merge to become DC Comics. 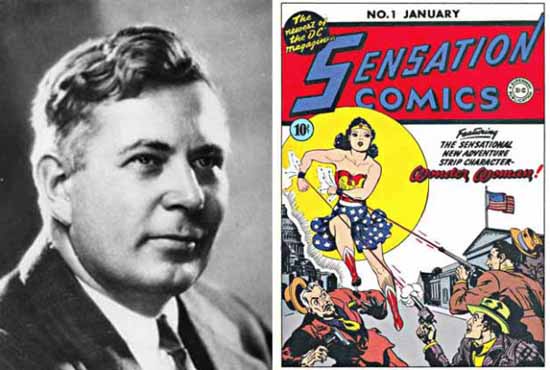 It was idea of Marston’s wife Elizabeth to create a female superhero who would not only conquer evil with her physical strength, but also with love. In a 1943 issue of ‘The American Scholar’, Marston, who was also the inventor of the polygraph test that also inspired Wonder Woman's lasso of truth wrote:

"Not even girls want to be girls so long as our feminine archetype lacks force, strength, and power. Not wanting to be girls, they don't want to be tender, submissive, peace-loving as good women are. Women's strong qualities have become despised because of their weakness. The obvious remedy is to create a feminine character with all the strength of Superman plus all the allure of a good and beautiful woman.”

It wasn’t until 2017 when the majority of Marston’s personal papers arrived at the Schlesinger Library at the Radcliffe Institute for Advanced Study that helped form the backstory of the creation of Wonder Woman that included the tale of his unconventional personal life with both Elizabeth and Olive along with a connection to Margaret Sanger who was one of the most influential feminists of the 20th Century.

Although William Marston died of cancer on May 2, 1947, both Elizabeth and Olive continued to live together until Olive's death in the late 1980's with Elizabeth passing in 1993 at age of 100. William Marston was inducted into the Comic Book Hall of Fame in 2006.

Professor Marston and the Wonder Women premieres today in theaters near you.