Movies That Have Everything: X-Men Apocalypse STARTS FRIDAY!!! 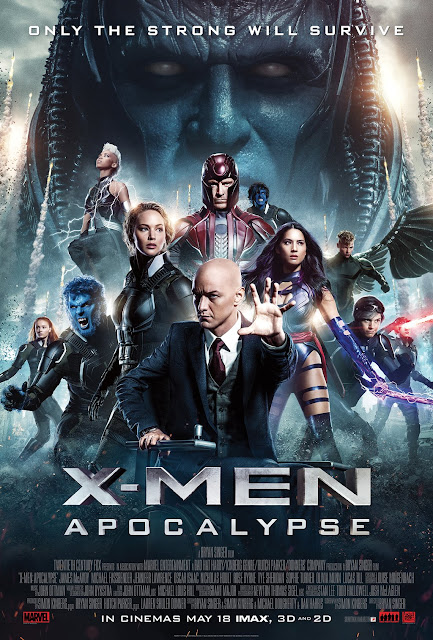 If you can believe it, X-Men Apocalypse, the sixth flick in the Marvel mutant franchise (ninth if you count the two Wolverine movies and the recent Deadpool film) is starting this Friday. Although it's the sixth  in the X-men movie timeline, it's actually the third staring the members of X-Men: First Class which brought us younger versions of the original X-Men characters from the first three movies (confused yet?). Well rest your pretty little heads and take a gander at the the trailer below:

For X-Men: First Class, the film was set as a period piece in the 1960's. The sequel, X-Men: Days of Future Past took place both in the far future, but mainly in the 1970's. This time around, we get into Pittsburgh Underground's favorite era - the 1980's to defeat the world's first, and most powerful mutant, Apocalypse before he can set forth his dubious plans to take over the world.

The gang at Pittsburgh Underground has been fairly satisfied with what a lot of folks are calling a 'course correction' for the X-Men series after somewhat negative reviews of X-Men:: The Last Stand directed by Brett Ratner (better known for the Rush Hour franchise), who took over for Brian Singer who bowed out for a break in 2006. Brian Singer has always done the X-Men justice and we love our period pieces at good ol' PU so we're excited to see how the 80's are represented in this universe. That and the addition of some fan favorites - Nightcrawler, Cyclops, Storm, and Jubilee along with our curiosity being peaked for Sophie Turner's portrayal of Jean Grey (Ms. Turner more commonly known for playing Sansa Stark of Game of Thrones) and Olivia Munn (remember her from her G4 days - she's come a long way!) as playing Psylock for the first time are reasons to get us into the theater this weekend.

As for what lies ahead for the X-Men and FOX? X-Men has been the most successful franchise not contained within the official Marvel Cinematic Universe and the only confirmed rumor is a sequel to the Ryan Reynolds spinoff, Deadpool, that's been greenlit after surprise earnings this year of $754.5 million globally. After this latest film in the series, it's anybody's guess as to where the X-Men will go next. X-Men: Apocalypse starts this Friday at a theater near you!