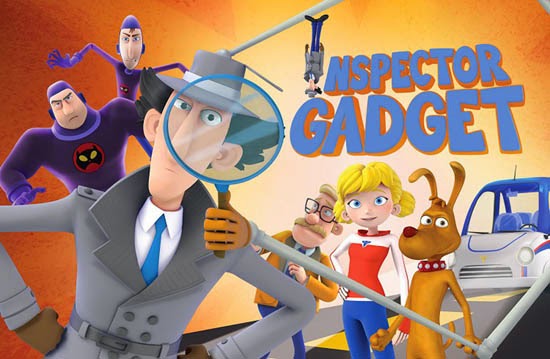 Happy Friday everyone! Big news as one of our most favorite cartoons from the 80’s get’s an update in the all NEW Inspector Gadget series premiering today on Netflix! Check out this trailer!

Staring in the voice talents of Ivan Sherry (as the Inspector), Martin Roach (Dr. Claw), Scott McCord (Brain), Tara Strong (Penny), Derek McGrath (Cheif Quimby), and Lyon Smith (as Dr. Claw’s Nephew, Talon), this new entry into the mythology is being produced by Canada’s DHX Media who acquired the rights from the Cookie Jar Group in 2008 who in turn had bought it from the original producers DIC Entertainment.

Sixteen all new episodes of Inspector Gadget are on Netflix now (looks like a bing weekend in the making!) with a new CGI make over (no worries, it still has that classic 80’s feel).

The original Inspector Gadget aired from 1983 to 1986 with one of our favorite actors, the late Don Adams in the title role of the Inspector. Adams developed much of the personality of Gadget which harkened back from his days as Agent 86 on the 1965 series Get Smart (another worthy favorite that everyone should catch in reruns whenever possible).

So if you’re lucky enough to be playing hooky today, then go-go gadget Netflix with the NEW Inspector Gadget!

BONUS!!! In the vein of nostalgia, here's the original Inspector Gadget opener!

Posted by Pittsburgh Underground at 9:30 AM