Movies That Have Everything: Troma Fest At Hollywood Theater THIS SATURDAY!!! 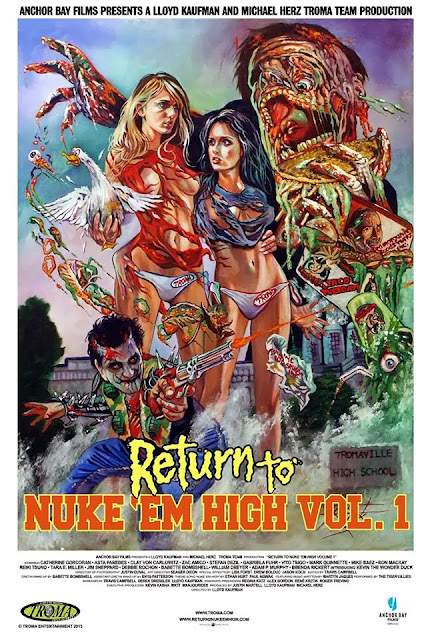 This Saturday at the Hollywood Theater in Dormont (1449 Potomac Ave, Dormont, PA), Horror Realm returns with Troma Fest. The evening featuring three movies from the Troma-vault! The movies include:

Mother’s Day (1980) at 5 p.m. Three girls discover that two men are willing to do anything to impress Mother and what impresses Mother is watching her son commit acts of rape and murder. Now these women are prisoners and lowered to pawns in the game of checkers between two dim wits and their Maniac Mommy and the question becomes, can any of them escape, alive?

Class of Nuke ’em High (1986) at 7 PM. The pu...pils at a high school next to a nuclear power plant start acting and looking strange after buying contaminated drugs from a plant worker.


And the new release Return to Nuke ’em High: Vol. 1 (2013) at 9 PM. Return to the Class of Nuke ‘Em High follows a young couple that are up against the school glee club. Unfortunately, the glee club has mutated into a gang called The Cretins. When the other students begin to undergo mutations, our couple must solve the mystery and save Tromaville High School.


Return To Nuke 'Em High (2013 Troma Trailer)
Tickets are $15 for all three films (in advance or at the door) or $7 per film (door only). You can nab your advanced tickets at this Showclix link. Hope to see you there!
Posted by Pittsburgh Underground at 11:30 AM