Tits For Telly: Breaking Bad, The Beginning of the End Starts THIS SUNDAY!!! 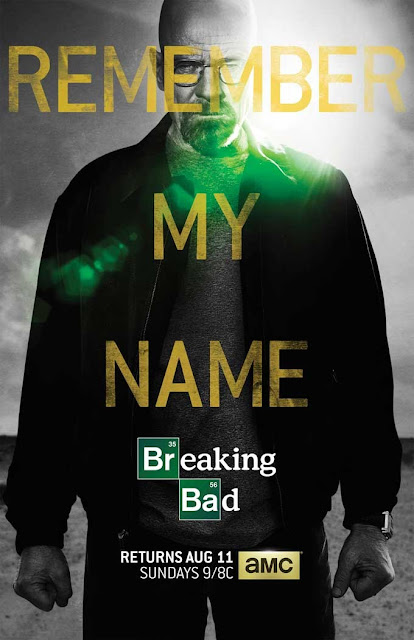 To say it's been a wild ride would be an understatement as the show's creator, Vince Gilligan has allowed both Walter White (Bryan Cranston) and Jesse Pinkman (Aaron Paul) to become our tour guides through through a chaotic five years (or if you go by the show's timeline - one very LONG year) only to leave us hanging last summer with a final, ominous shot of Walter's brother-in-lawman, Hank Schrader (Dean Norris) finally putting two and two together only to realize his white whale is in the very next room.

For those of you who haven't caught up yet, the plot is simple. Walter White, high school chemistry teacher, part-time employee of a local car wash, failed entrepreneur of Gray Matter Inc. (think Microsoft, but with Chemistry), loving husband to a newly pregnant wife, and father to a special needs teenager is diagnosed with stage 3 cancer and only given two years to live. While attending a meth lab bust with his brother-in-law, DEA officer Hank Schrader, he notices his former student, Jesse Pinkman escaping by the skin of his teeth (he was boinking the neighbor next door during the bust). From there, Walter, determined to secure a future for his family goes into the methamphetamine game with Jesse. The series tracks how a fatal diagnosis on a regular guy changes his ethics in drastic ways and how the chaos he creates ripples into the lives of folks both close to him and not so close to him as he climbs his way up the ladder, being the only player in town.

The series has won all the big awards - seven Primetime Emmy's, including three best actor wins for Bryan Cranston, two best supporting actor wins for Aaron Paul. and four nominations for Outstanding Drama Series. Cranston has also been nominated three times for a Golden Globe Award for Best Actor and nominated four times for a Screen Actors Guild Award for Best Actor, winning once at the 19th Screen Actors Guild Awards. Not only has the show been widely acclaimed, but as also named number 13 in a list of 101 best written TV series of all time by the Writers Guild of America. Not bad for only five years on the air!

So now here we are at the end of another era. Like all the great television that came before it we all wait with baited breath to find out what happens to Walter, Jesse, and let's not forget one of Pittsburgh Underground's favorite lawyers - Saul Goodman (played with great comedic charm by Bob Odenkirk). Hey who knows! If we're lucky, maybe we'll even get a Saul spinoff! BETTER CALL SAUL!!!

With that said, Pittsburgh Underground wanted to bring you some of our favorite Breaking Bad moments to commemorate the end of Walter White (aka Heisenberg) & Jesse Pinkman's journey together. So check out these clips put together by fan, Gabriel Rojas that recaps all theBreaking Bad goodness up to the final eight episodes airing this Sunday night at 9pm on AMC.

Breaking Bad Seasons 1 Thru 5 Recap / AMC
Fan Made by Gabriel Rojas
Posted by Pittsburgh Underground at 11:30 AM