Artsy Fartsy: The World Premiere of Winnie the Pooh and the 7 Deadly Sins Starts THIS FRIDAY!!! 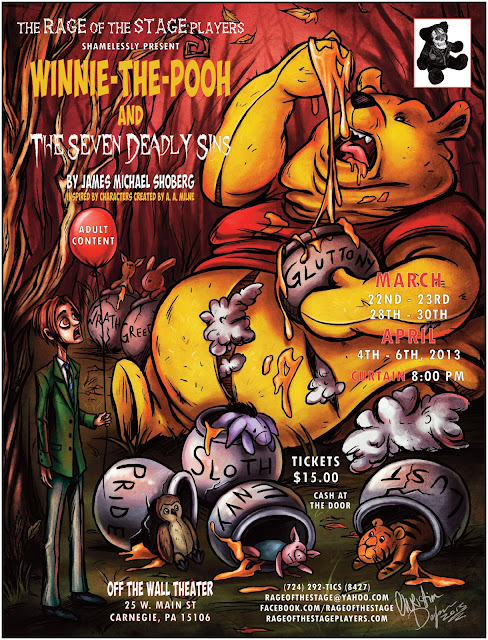 The Rage of the Stage Players are at it again, this time with their 2013 Spring production of Winnie the Pooh and the 7 Deadly Sins, a vulgar twist on the classic characters of A. A. Milne!

Award-winning Pittsburgh playwright James Michael Shoberg’s newest racy fairy tale comedy, Winnie the Pooh and the 7 Deadly Sins tells the tale of a more jaded, sixteen-year-old Christopher Robin, who is coming to terms with his homosexuality. He soon finds that his seven year absence from the Hundred Acre Wood, has had a disturbing effect on his imaginary friends, who dwell within…Winnie-the-Pooh (Gluttony), has become obese and overtaken by diabetes; Piglet (Envy), always dissatisfied by his own life, covets the lives of all who surround him; Eeyore (Sloth), has a far bleaker outlook than ever before, leading to self-destructive tendencies; Tigger (Lust), never one to respect personal boundaries, has found that pouncing can lead to so much more; Rabbit (Greed), avaricious and paranoid, is desperate to protect all that is his; Owl (Pride), unaware of his problem drinking, continues to maintain an air of smug superiority over his fellow animals; and Kanga’s household is menaced by her now grown-up son, Roo (Wrath), an Australian kickboxer and violence-junkie.

If you enjoyed his past fractured adaptations: "ALICE'S ADVENTURES IN 'WONDERLAND,'" "DOROTHY IN OZ," and October 2012’s "HOOKED," just wait until you see what he has in store for that “silly old bear!”

The fun begins THIS FRIDAY, March 22nd at 8PM at Off the Wall Theater (25 West Main Street, Carnegie PA, 15106) with additional performances as follows:

For reservations (highly recommended) and/or questions call (724) 292-TICS (8427), email at rageofthestage@yahoo.com, check out the Rage of the Stage on Facebook, or at the Official Rage of the Stage Players Website. Hope to see you there!
Posted by Pittsburgh Underground at 11:30 AM