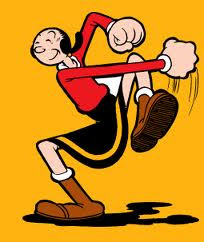 Ah the good old days! Some of us are way to young to remember 'those times' anymore (or ever if you were born after the 1990's). When we were all kids, the idea of running for president was something of a fantasy, being equivalent to that of a monarch that could impose his (or her) will on Americans everywhere (all for the betterment of the people of course!).

Turn the way back machine to 1948 when it was Truman vs. Dewey, movie tickets cost 60 cents, and the likes of Ozzy Osbourne and Alice Cooper slithered into our world via the nether. This was also about the time when Popeye's goofy gal pal, Olive Oyl got the bug in her rug that running for president shouldn't be just a man's game, but a woman's as well.

With that said (and being that it is election day), enjoy this little feature, Olive Oyl For President from Famous Studios from 1948 containing a very catchy tune that might just help you get through the election fever of 2012.