Artsy Fartsy: War Horse at the Benedum THIS WEEKEND!!! 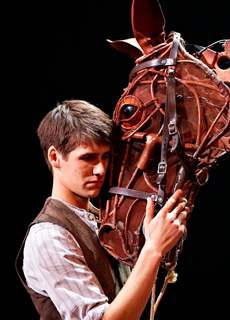 This weekend the gang from Pittsburgh Underground is extremely excited because we'll be at the Benedum Center (thanks to the generosity of our pal Unky Chops!) checking out the Handspring Puppet Company from South Africa as they perform their rendition of War Horse. Check out this footage!

For those of you not familiar with the story, it begins in England at the beginning of World War One with the central character of Albert who's best friend Joey (his horse), is sold to the cavalry and taken to France. Whisked away into war torn Europe, Joey eventually finds himself in a vast wasteland. Albert, loyal to the end and not old enough to enlist begins his tumultuous journey to find him.

What truly sets this apart from the 2011 Steven Spielberg movie adaptation, is the technical achievements in puppetry that brings the story to life in true three dimensions.

In this TED Talk, Adrian Kohler and Basil Jones from Handgspring Puppet Company, explain their methods of puppet mechanics when developing a full scale replica of an equine created from cane, that also is ridden by a live human in the live theatre production of War Horse.

War horse is only here until Sunday, November 18th - for more information about the production, get it straight from the horses mouth at the Benedum Center's Official Website or at the War Horse Official Website.