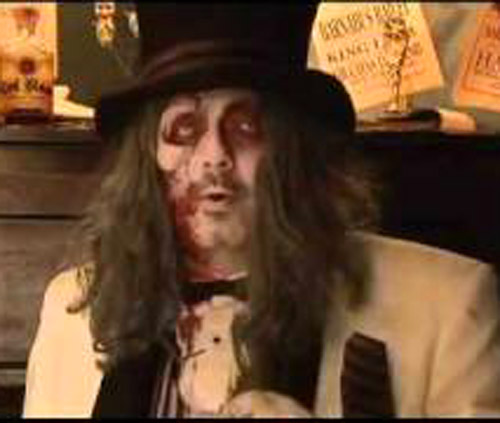 Barnabus Bailey, the Ring Master of the Macabre

At 10PM, episodes 1 and 2 of Ink Master will be featured along with booze, tacos, and burgers - all at a reasonable prices along with raffles for gift certificates, t-shirts and a 50/50 drawing to benefit the Children's Hospital of Pittsburgh.

Also, artists from Wyld Chyld are scheduled to make an appearance as well while the word on the street is that the 'Tattoo Barnabus Contest' rages on (at least until October 15th where you can vote in person at World Zombie Day THIS WEEKEND - more on that later in the week here at PU!) where minions can vote on one of five tat designs by the Wyld Chyld gang that Barnabus will have etched on his rotten carcass by none other than the lovely Sarah Miller herself (to be aired on a future Barnabus Bailey's Sideshow Freaks - we'll keep you posted!).

Remember - the fun begins tonight at 9PM!!! Hope to see you there!!!
Posted by Pittsburgh Underground at 11:30 AM