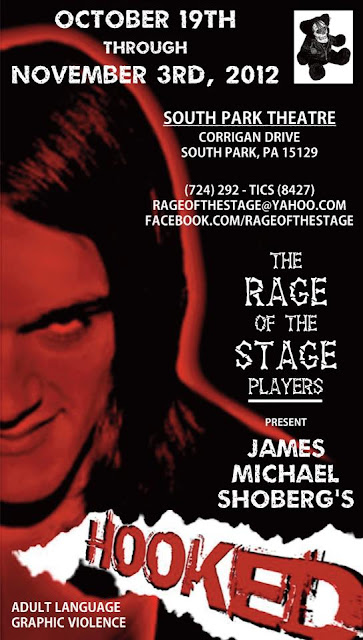 This Friday at 8PM, our friends at The Rage of the Stage Players, Pittsburgh's only dark fringe theatre company, present a visceral, twisted, one-of-a-kind stage production, very well-suited to the Halloween season!"

The world premiere of James Michael Shoberg's latest stage adaptation, Hooked, is a grim, violent twist on J.M. Barrie's novel, Peter and Wendy, set in a future London, overwrought with crime and drugs, where societal decay has left the city a ruined husk of what it once was. When an injured young punk, referring to himself only as "Pan," crosses paths with a girl named Wendy Darling, she and her two brothers, John and Michael, are drawn deep into the heart of the city, where even the junkies, prostitutes, gangs & practical thugs have something to fear...a disfigured drug lord named James...better known on the streets as "Hook."

Showtimes and pricing for the event is as follows:

COME MAKE IT A NIGHT OF HALLOWEEN HORROR IN SOUTH PARK!
Rage fans new and old alike...you will NOT want to miss THIS ONE!
Posted by Pittsburgh Underground at 11:30 AM