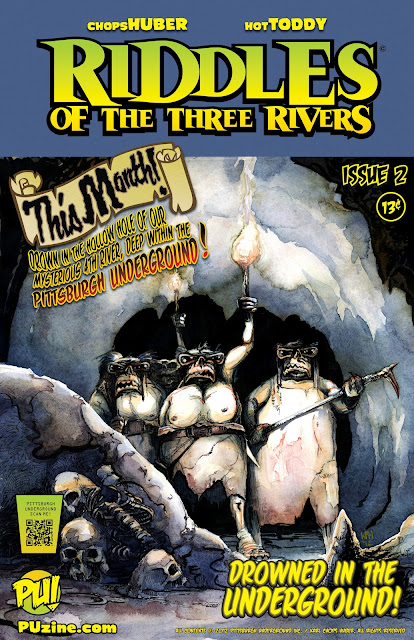 
The gang here at Pittsburgh Underground can't believe that we've come to the end of another January! With that comes a brand new PU Pulp Poster from our old pal, PU Artist Chops Huber! This month, Chops brings us Riddles of the Three Rivers / Issue 2 / Drowned in the Underground!  Download your FREE copy today!

You mean you've never heard of the fabled underground 4th river of Pittsburgh? Yes, we have a bonifide  aquifer (A body of permeable rock that can contain or transmit groundwater). Want proof? Check out the fountain over at Point State Park where water is pumped to the surface using specially designed pumps. Want to impress your friends? The proper name for our 4th river is called the Wisconsin Glacial Flow. Wanna really impress them? No one truly knows what lurks within this bed of rock and gravel, except that is for Chops Huber! Click below for more on this deeply disturbing tale as told by Chops himself!

The land was all unbroken.  The wooden ships had just arrived and the settlers took their first steps in a strange land.  A hunter, a man from a local tribe, greeted them.  What he or his people were called has been lost.  The tribe welcomed the new arrivals.  A single boat was sent back to the ship to secure it until morning.  That evening, it is told a great shock went through the ground and a great rip opened up and then closed again.  When the lone boat returned to shore, everyone, both newly arrived and native, and all they had or were, were gone.

In the years that followed, other ships arrived, bearing new settlers, unaware of the tragic mystery in the land under their feet. And how, as the years past, a town was built, and grew into a city, and how more people kept coming.  That’s when the disappearances began.

The townsfolk blamed witches or wolves. When there were no more witches or wolves, they found other “reasons”.  Madness, murder, drug abuse…the reasons changed.
But the people kept disappearing all the same.

But my family knew, I knew, what really happened.  I had listened to the story over and over as a child.

Those people, the ones that vanished first, they didn’t die, and they didn’t vanish.  They went down into the earth when the land broke open, and there they stayed.  And there they lived.  And they live there still.  Time and darkness have fashioned those survivors into different forms, grotesque and twisted.  And in the dark, alone, their minds have gone as well.  They can no longer be called human.  They sustain themselves entirely within their underground world, searching with heightened senses of touch and smell and sound, eating anything they find…

And yet, some lingering remnant of their humanity remains.  They are compelled to return to the surface, and take those they find back with them, underground.   For what dark purpose no one can say.

Of course, there is no proof of this.  It’s only a story to frighten children in the dark, passed down from generation to generation.