Greetings all you ghouls and fools! The Zom-B-Rama Charity Carnival, will be shambling it's way to the Monroeville Mall!!!  THIS SATURDAY from Noon to 9PM!!! Hosted by PU Pal and Ringmaster, Barnabus Bailey from The Greatest Show Unearthed, this event is sure to deliver on the shrills and chills for this worth-while charity! 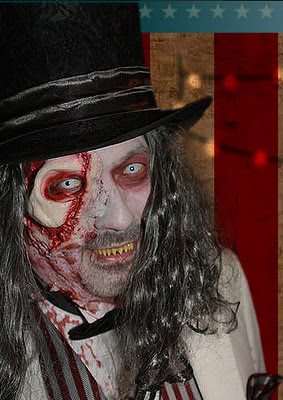 Your Host for Zom-B-Rama,
Barnabus Bailey from The Greatest Show Unearthed

Zom-B-Rama's sponsor back from the dead after a brief hiatus, Monroeville Zombies, a zombie-themed tourist attraction returns to the Monroeville Mall in Monroeville, PA with a Carnival Themed Grand Re-opening.

Zom-B-Rama is an annual zombie Halloween celebration hosted by the mall based attraction. This year's event is scheduled for October 22, and will also coincide with Monroeville Zombies' reopening in a new larger location featuring more activities and exhibits. 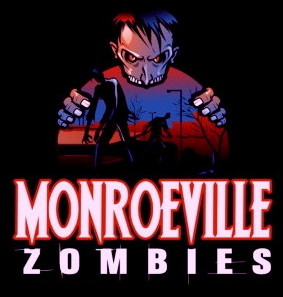 Monroeville Zombies is now located inside the Monroeville Mall's Funhouse Video Arcade in the lower level at Macy's court. The new larger location allows for more space for zombie exhibits and fun activities such as, “Hole in the Mall”, a retro 70's Monroeville Mall themed Mini-Golf and the future expansion zombie-themed shooting gallery. The Monroeville Mall was the film set location of the classic 1978 zombie horror film, “George A. Romero's Dawn of the Dead”.

Carnival proceeds benefit the Save the Evans City Cemetery Chapel a fund raising effort to restore the cinematic landmark from the 1968 film classic, “Night of the Living Dead”. Event hours are Noon to 9:00 PM.

“You can't kill something that's already dead,” says Monroeville Zombies President Kevin Kriess. “It's a line from a zombie movie, but it also describes our presence in the mall, we just keep coming back and all the while celebrating Pittsburgh and Monroeville's place in modern horror film history.”

About Monroeville Zombies:
Monroeville Zombies is a museum and tourist attraction celebrating Zombies in Pop-Culture. Located in
the historic Monroeville Mall, location of the original film, George A. Romero's Dawn of the Dead , the themed attraction takes fans through a visual history of zombies in cinema. Displays of props and memorabilia are woven into a presentation featuring interactive experiences and zombie gift shopping. For more information, visit www.monroevillezombies.com and www.Zom-B-Rama.com

About Barnabus Bailey and the Greatest Show Unearthed:
The Greatest Show Unearthed is a dark carnival themed program in the spirit of Chiller Theater, hosted by zombie ringmaster Barnabus Bailey. The program, which launches its web based premiere on October 31, will showcase independent films as opposed to classic public domain midnight movies. For more information, visit www.greatestshowunearthed.com