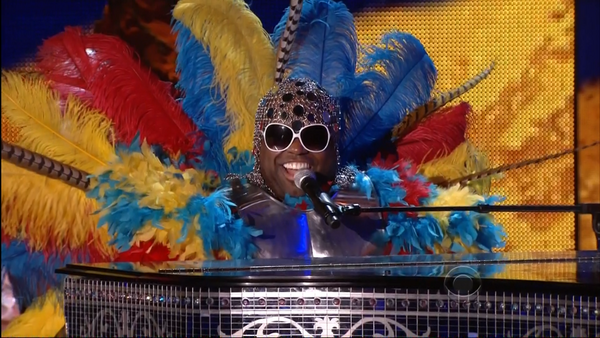 Hey kids! Welcome to a brand new bloody segment entitled: Music 4Ur Bleedin' Ears. Now, don't get me wrong - the gang here at Pittsburgh Underground isn't going to even pretend that we're a music site (we aren't). However, we dig the music - so today, we talk tunes!

Seriously, did you ever get a song locked in your noggin' that you can't get out for days (or weeks, or MONTHS even!). Who hasn't? Let's face it gang - catchy is catchy regardless of genre. Tony Bennett was once asked why the younger generation had locked onto some of his tried and true tunes? Mr. Bennett replied, "good is good'... ). Wise sage... we here at PU agree.

So with that said, I wanted to turn our attention to a dude that's been around for a while - Cee Lo Green. This guy has accomplished a lot in his young life - a rapper, singer-songwriter, producer, and an actor. Not bad for a dude  nearing 40. Seriously - this guy even had a cameo in one of PU's favorite movies, Mystery Men, as one of the Not So Good mob.

Cee Lo Green recently caught my attention (literally like something shiny out of the corner of my eye) when he performed with Gwyneth Paltrow (seriously not sucking) on the 2011 Grammy's (which I did not originally watch - hey, after the whole Millie-Vanilli debacle, the Grammy's can yanky-my-wanky).

I accidentally came across Cee Lo doing a search on YouTube for (of course), the Muppets (So sue me! They remind me of simpler times!). This is when I stumbled onto this incredibly fun-filled footage of Cee Lo, Gwyneth, and an entire Muppet band - Yes kids, Brian Henson, son of Jim (son of Jor-El - yes, I'm f*cking with you) was approached by Cee Lo himself - bloody awesome!!!). Check out this amazing bean footage:

Cee Lo Green, Gwyneth Paltrow, the Muppets
Perform 'Forget You' at the 2011 Grammys

See... AMAZING!!! What can I say, this is the kind of alchemy in a performance that I'm a sucker for.  The entire sequence took me back to being a kid in the 70's with The Muppet Show absorbing me into the TV.  In a word, I thought this rocked! Check out that vintage costume too! This is a throwback reminiscent of when Sir Elton John guest starred on the Muppet Show way back in October of 1977 in episode 214 when he performed Crocodile Rock. BONUS: Check out Elton John's performance - it's still amazing!

Now I can't get the damn song out of my head so I do what anyone would - I went to Amazon to nab my copy so I could play it a million times til I got sick of it (Ya! Take that brain!!!). Then I see the OTHER version of Forget You - the ORIGINAL version entitled, F**K You!


Fine... So what if  I'm a little out of the loop with your new fangled rock-n-roll, and your internets, and your iPodders... The Clash still rock the casbah and my MTV played music ALL DAY damn it!!!

Without further adieu... Cee Lo Green performing F**K You! (note, for all you lily-livered, mamby-pampy, itsy-bitsy, babies - it's explicit so TURN IT UP BITCHES!!!).

Now, I'm not saying that I've dated that girl (at least twice a decade), but I think it's safe to say that Cee Lo Green and I could be kindred spirits. The side effect? Now I've got both versions playing back to back in my head!

No worries kids - it's good for big smiles (Cee Lo Green proves to be a great entertainer and accomplished this with ease for me). Granted, a few more days of it and I my brain may just turn to tapioca, but until then - you have impressed me Mr. Green (well played)...
Posted by Anonymous at 11:30 AM

Email ThisBlogThis!Share to TwitterShare to FacebookShare to Pinterest
Labels: Music 4Ur Bleedin Ears