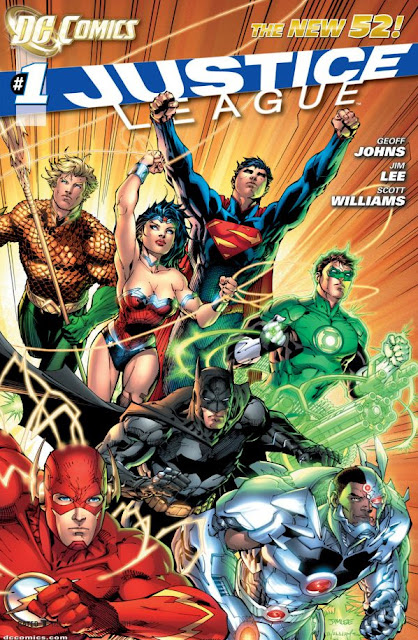 Hey all you fan-boys (and girls) of all thing fearless! Well, it the first week of the DC Comics self-titled reboot, The New 52. What did this mean for DC fans? Did the souls of our existence fold under the weight of what could be called the second Crisis on Infinite Earths? Has the very fabric of the space-time continuum been forever changed with all possibilities of total implosion? Have dogs and cats started living together? Does my ass look big in these pants? Is there really people in Soylent Green?

Seriously - I've heard both cries and compliments from those lover's of all things DC. I've talked to the horse's mouths, asking personal friends who work within the crazy confines of the industry on their two cents. I've heard all the musings from those who've never laid their hands with any book that had the word 'Bat' in their title. What's the verdict? The final word? The end-all, be-all?

My answer? Nab the first book of the new continuum - Justice League / Issue #1, sit back, relax your crack, and feel comfort in the surroundings of some old friends. In this case I'm talking about Batman, Green Lantern, and the last son of Krypton - Superman.

Before I get into the Justice League, I want to say that I grew up on DC Comics during the late seventies all the way through the early nineties (that's right - from grade school through college - a long time by anyone's standard). They were the only American mythology I gravitated to. My own greek gods. The people (other than my parents) that taught me about right and wrong, sacrifice and courage - what it ment to be a hero (and subsequently a villain as well). Yes, I admit - I love my DC Comics.

As with most wide-eyed kids, I became a fairly jaded adult and turned away from DC Comics in the early 90's due to their rising prices, ridiculous marketing strategies (what do you mean I have to buy five Batman titles to know what's going on in the story?), and quiet frankly - tired story writing. Let's face it - after you cripple Batgirl, kill Robin, and marry off Superman (ok, and then kill him) what's left? I had outgrown my heroes and DC Comics and jumped into more independent titles from Dark Horse, Image, or IDW.

Flash forward to today. Jaded adults will, on occasion, wax nostalgic about our childhoods, longing for simpler times. Images of the Thundercats, Atari, and our favorite pastime - comic books are often revisited in order to keep the spark alive (let's face it kids, some things are just good for the soul). I guess it makes sense then for the birth (or rebirth) of the New 52. For those of us who looked to Batman, The Flash, Firestorm, Captain Atom, and yes - even Superman as fictional mentors to look up to, this new reboot might just be what the doctor ordered. 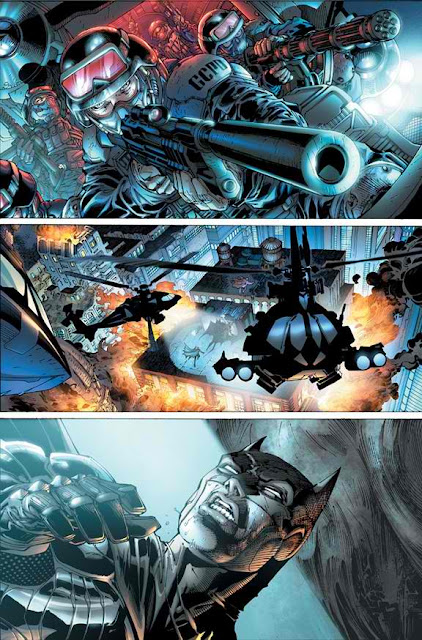 Justice League #1 by our old pal Geoff Johns (the best thing to happen to DC comics since the son of Krypton) scribes one of the most fun DC Comics origin team-ups that I could remember in recent memory. Keep in mind that this story begins the brand new continuity. In otherwords, Batman is still a vigilante in Gotham City, Superman is still considered an alien from another planet, Hal Jordan is the newest of the Green Lanterns patrolling sector 2814 (Earth - duh!). 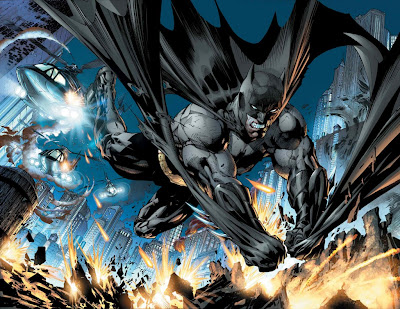 SPOILER ALERTS AHEAD! So, for this first issue of Justice League we set up the stage with Batman in Gotham City chasing a rogue alien of unknown origin all the while having the coppers of Gotham hot on the vigilante's tail. In pops Hal Jordon, Green Lantern of Earth to do his duty like a good space-cop, setting off the friction between the two characters from the very beginning.

The best part about this first encounter is that Geoff Johns takes his time in establishing the personality traits that set these two classic characters at immediate odds with each other. Remember, this is the first time that Batman and Green Lantern meet in this new DC Universe. Hal Jordon, the over confident test pilot with the ability to create anything with his mind via his extra-terrestrial power ring and Batman, the seasoned veteran who is not only the worlds greatest detective, athlete, and scientist, but is also Hal Jordan's better regardless that he has no true 'super powers' to speak of. One of my favorite moments in the book is Hal barking at Batman, "Hold on a second... You're just some guy in a bat costume aren't you? ARE YOU FREAKING KIDDING ME?!" 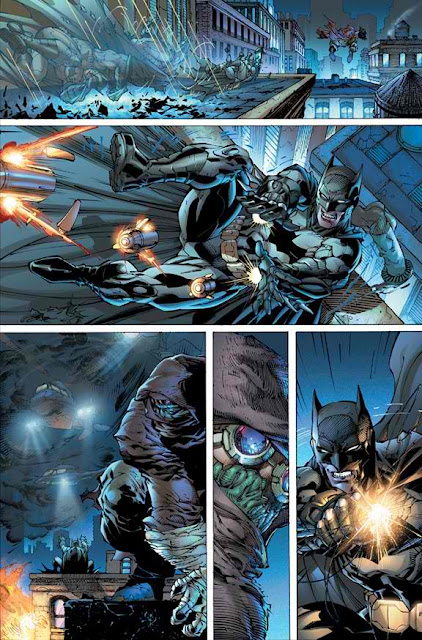 Not only does Batman get the upper hand against Jordan throughout the book, but he also shows true leadership from start to finish - this is the Batman I grew up with. Of course the two of them team up (it wouldn't be a Justice League book if this weren't the case) find the alien who not only plants what appears to be a bomb in the Gotham sewers, but also self destructs uttering the words 'For Darkseid!" before it goes kaphlooey! Yes, the plot thickens. 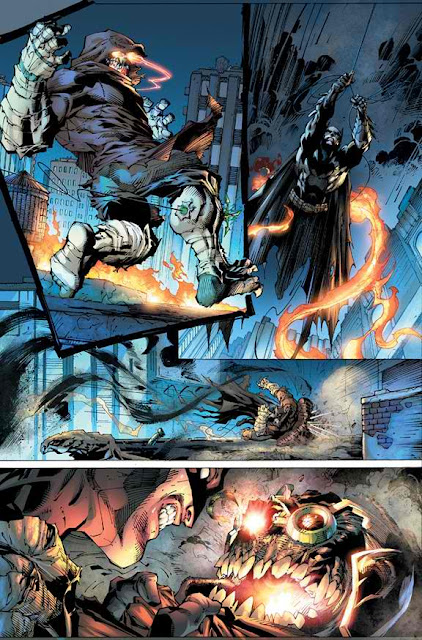 From there the two travel to Metropolis in search of the only 'alien' that's made himself known on Earth - the last son of Krypton, hoping to gain some answers about the alien device. In the process we get a quick glimpse of Victor Stone (the future Cyborg of the Teen Titans) as an up and coming football star longing for the attention of his workaholic father, one of the geniuses at S.T.A.R. Labs (where all the best stuff in the DC Universe is made!). Not much is revealed at this point about the character other than he feels neglected by his dad, but we all know better let alone the fate of young Victor. 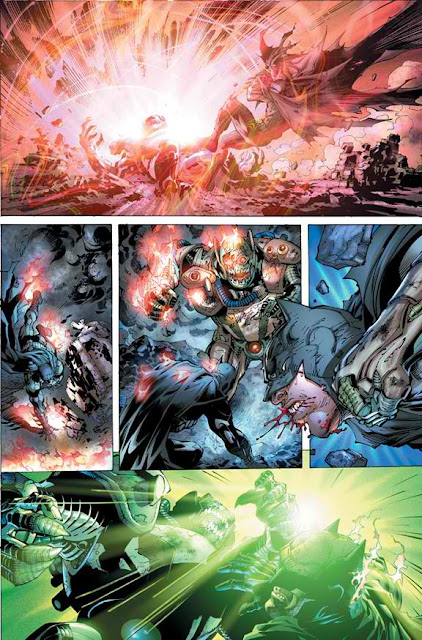 Finally, we get to Metropolis in a big Green Lantern glowing jet (so everyone can see them coming), an annoyed Batman, and an overly confident Hal Jordan in search of Superman stating that he can 'handle this'. Of course, low and behold we get our last few panels of Supes clocking Jordan as he rushes to a complete stop in defiance to this statement ultimately looking at Bats and asking him 'so what can you do?"

This also introduces the new Superman costume to the world as designed by artist Jim Lee. That's right kids - long gone are the red undies and yellow belt now replaced with red belt, all blue tights, and priest-high collar (damn goodie-two shoes). A new Superman for an new millennium along with additional changes to other costumes in the DCU (we'll talk more about the changes in future reviews). 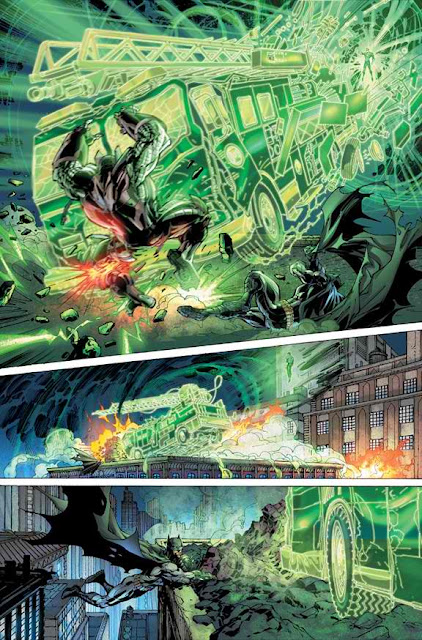 Jim Lee does his thing to bring the characters to life, although the usual criticisms about his penciling reign true in this first issue of Justice League as well. For the most part, great panels, however over rendered in areas. Even with a great colorist like Alex Sinclair appears to have put to great task in trying to pick out the multiple levels of detail. Secondly, the lack of emotion is always evident in a Jim Lee drawing. Don't get me wrong - there are some places where you can see him trying to crack a smile, a surprised look, or even an enrage action shot - it just needs to be a bit more exaggerated. It is the comic book medium my friend, don't be afraid to take it step it up a notch. In otherwords, now's not the time to be shy. 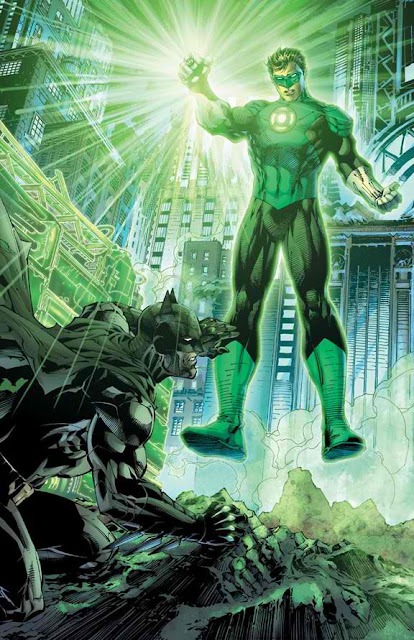 Overall, Justice League Issue #1 got me excited to see old friends again. That second page with Batman jumping out of the sky with bullets flying around him in hot pursuit of the enemy brought it all back to me in an instant. Why I loved these characters, why Wednesdays had meaning to me as a kid (the day when the new books hit the shelves), and why I may need to get a second job to fill my comic book cravings. You have once again peaked my interest DC Comics - now the trick is seeing if you can keep it.

Stay tuned for more Comics To Rot Your Brain as I delve into the new DC Universe as the new books start hitting the stands today (yes, I have my list ready and am heading to Duncan Comics to get my geek on) - Stay smokin'!

For more information on the new DC Comics Reboot, check out Pittsburgh Underground's July 2011 Article.
Posted by Anonymous at 8:30 AM