Movies That Have Everything: Tucker and Dale vs. Evil Premieres At The Hollywood Theater This FRIDAY!!! 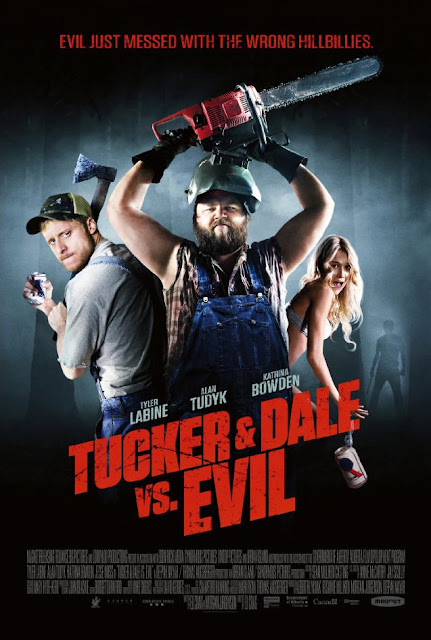 What evil looms in the hearts of men? Dale and Tucker know! That's right kids! Another awesome Magnet Film,  Tucker and Dale vs. Evil premieres this Friday at The Hollywood Theater in Dormont!

Directed by Eli Craig and starring three of PU's favorite actors, Tyler Labine (Reaper, Rise of the Planet of The Apes) as Dale and Alan Tudyk (V, Flyfly) as Tucker and the uber-hot Katrina Bowden (30 Rock, Piranha 3D) as Allison - this flick looks like a bloody good time! Check out the red band trailer below!

Tucker and Dale Vs. Evil is a hilariously gory, good-spirited horror comedy, doing for killer rednecks what Shaun of the Dead did for zombies. Tucker and Dale are two best friends on vacation at their dilapidated mountain house who are mistaken for murderous backwoods hillbillies by a group of obnoxious, preppy college kids. When one of the students gets separated from her friends, the boys try and lend a hand, but as the misunderstanding grows, so does the body count.

Tucker and Dale Vs. Evil has been a hit on the festival circuit, debuting at Sundance, and winning the Midnight Audience Award at SXSW, the Jury Prize for First Prize for First Feature at Fantasia, the Best Director award at Fantaspoa, and the Best Motion Picture Award at Sitges.

The evil begins this Friday at The Hollywood Theater in Dormont starting at 9:30 PM. The gang from Pittsburgh Underground will be waiting in the balcony for you!

Posted by Pittsburgh Underground at 8:30 AM