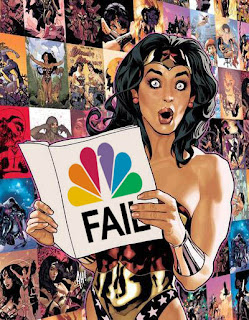 Hiddy-ho my minions of mayhem! Well, low and behold, the geniuses at NBC have done it yet AGAIN, and pulled the plug on another show before it could even get off the ground. The new Wonder Woman series that had already gone into production was cancelled before the Princess of Paradise Island could soar into the spotlight once more (see our April 4th article for more info). None of this should come as a surprise as NBC has been notorious for their legancy of mismanaged (or mismangled as the case may be) properties pissing off audiences and advertisers alike in the process.

Most likely a blessing in disguise as this latest outing for the well known heroine had left a bad taste in fanboy mouths across the country with much of the critisism focusing a plethera of issues including the highly publicized reactions to the pilot script, costume concepts, character portayal, and the eyebrow raising association of David E. Kelly of Ally McBeal fame as both writer and producer for the ill fated show.

We know what you're thinking - how could NBC screw up something that fans of Wonder Woman have been waiting patiently for for nearly three decades (we still love you Lynda Carter!)? All we can say is that this is one more nail in the NBC coffin as history seems to keep repeating itself for the doomed network (check this out clip of the Paul Reiser talking to Jay Leno about the demise of his newest sitcom that was yanked after only two episodes).

Remember Heroes? The Cape? Medium? Perfect Couples? My Name is Earl? How about the Conan O'Brien / Jay Leno debacle? Remember when NBC lost Letterman to CBS? Truth be told, if you turn the wayback machine far enough into the past you'll find that the proud peacock also 86'd Agent 86 (played by Don Addams) in Mel' Brooke's own Get Smart! They even Star Trek was vaporized from their schedule back in the 60's (that's right kids, Captain Kirk only sailed the stars for a mere 3 seasons on NBC before they pulled the plug). 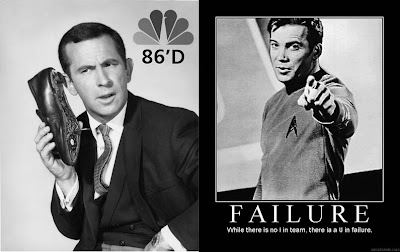 Sorry about that Chief! Agent 86 & Captian Kirk
Both victims of the NBC Brass

Seeing a pattern too? All we can say here at good ol' PU is to keep the fickle mind of NBC execs in mind the next time you are lured into the promises of 'Must See TV'. Chances are whatever you are watching won't last very long.


Posted by Pittsburgh Underground at 2:42 PM