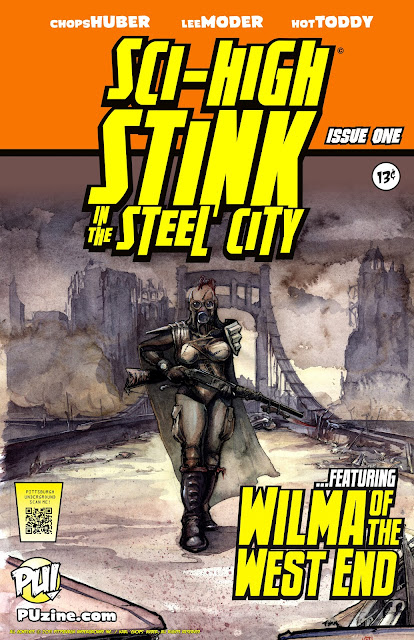 Well.... hell's bell's kids! What can I say other than it's been a very cold and hectic January here at Pittsburgh Underground Headquarters, but we haven't forgot about YOU! Never fear - the gang at PU is always working hard to bring you our custom brand of hoo-ha and this month has been no exception!

This January, our own Chops Huber has cooked up another bitchin' PU Pulp Poster! This time it's Sci-High Stink in the Steel City - Issue One, featuring Wilma of the West End!

Any of you yinzers that have been walking our downtown streets in this wicked weather can relate to our heroine, Wilma, as she sashay's across the Roberto Clemente bridge in Chop's version of post-apocalyptic Pittsburgh!

UPDATE: This PU Pulp Poster has been UPDATED as of August 3rd, 2012 to include revisions to our QR Code and Website Address - PUzine.com -  Download and print this PU Freebie and hang it on your fridge, stick it to your skateboard, glue it to your little sister's head - THEN use your smartphone to scan the code to follow Pittsburgh Underground wherever you are!

-Reporter at large
Recent excavations near the western boundaries of City Central have uncovered a large collection of handwritten documents which our history experts have concluded are up to several hundred years old; an important find as very little information has been found detailing the immediate aftermath of the Share Atomic Solution. While no specific dates can be taken from the text, it is possible to determine the era in which they were written due to the detailed descriptions of both the monumental devastation about the area as well as the encounters with local flora and fauna know only to have existed in the immediate aftermath of the Shared Atomic Solution. The writings are apparently the work of one person, and were found along with an assortment of items (graphics, ornaments, apparel…) in a tunnel in what was once locally known as “Pitt”s Burgh”. The metropolitan area was a modest group of buildings and bridges set among the hills at the confluence of three rivers. A survey team out at the nuclear fringe, were looking for new outlets to help with the current sewage problem when they discovered the collapsed tunnel system.
Little personal information is given. There are however several mentions of encounters with a group of militia as well as local enforcers. In addition, several of the collected notes make mention of reward for the death and/or destruction of a young woman named Wilma. A comparison of the text with the details from the warrants makes it a strong possibility that the author of this account is the person mentioned by the warrant. It is generally accepted that at the time of the writing, she is 20-25 years old, and is basically described in the notice warrants as being somewhere between 5'-5.5' tall. The only visual information that can be accurately identified appears to be pictographs and montages cut or removed from other images. There does not seem to be any rational behind some of the images. They may have been gathered simply for their appeal to the author. In any case, none of the images seem to show the author or any personal contacts of any kind.
We do know the centuries following the Solution were violent and socially regressive in many ways. There was no governing structure at all over vast areas of the continent. Most of the major metropolitan areas had been destroyed, and radiation continued to linger in many places. Scavenging was commonplace and could easily turn violent, for reasons as simple as securing some rare flavored protein, to finding a lost piece of Pre-war technology. Local warlords appeared and disappeared, while savages scraped out a living pillaging the countryside. War mechs were still active and explosions rocked the landscape for many years after the wars were long over, the robots and computers following the final orders of their extinct operators. Elsewhere, buried in the vast military and science industry complexes, the munitions, drugs and chemicals of the vanished governments fell into the hands of anyone who could find them. The renewed ability to destroy furthered the violence and new chemical and drug addictions combined with persistent radiation launched new and destructive mutant strands.

When painted against this backdrop, it hard to imagine what sort of activities would be found criminal in a social environment such as this. Further examination of the documents as well as the site of discovery is needed to learn more about this elusive and violent girl.

From the outer fringe,
this is Chops Huber.
Posted by Pittsburgh Underground at 11:30 AM