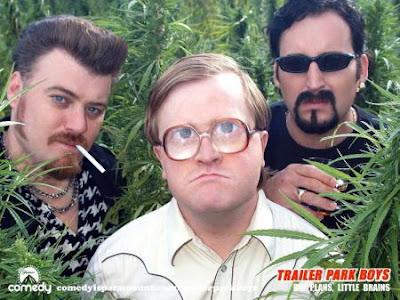 The Trailer Park Boys - Ricky, Bubbles, and Julian
Hey kids! Our friends from the great white north have invaded the steel city tonight at the Byham Theater! That's right - the Trailer Park Boys are here for one night only and the gang from Pittsburgh Underground will be there for all the fun!

For those of you who live in a bubble, The Trailer Park Boys (Ricky, Julian, and Bubbles) first appeared in the 'no budget' short by Mike Clattenburg in 1998 and then the Atlantic Film Festival in the 72 minute movie entitled 'Trailer Park Boys'. The plot is a simple one - the tales and misadventures of the boys along with the residents (most of whom are ex-convicts and degenerates) of the Sunnyvale Trailer Park located in Dartmouth, Nova Scotia.

This isn't their first rodeo either! The boys have toured in the past - 'court ordered' of course, to put on the show to fulfill their 'community service' for 'prior convictions' with Pittsburgh being one of their many stops along the way.

Here's to the boys - can't wait to see them tonight! Hope to see you there as well!
Posted by Pittsburgh Underground at 9:39 AM