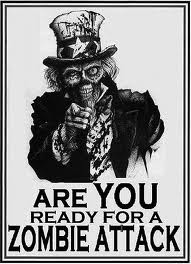 Ahh... the change in season is now upon us and here at PU and our favorite time of the year rapidly approaches. The cooling weather signals the return of the Penguins, long pants, and our favorite holiday - Halloween (Duh! - for those of you who thought I was referring to the Steelers, you’re on the wrong blog).

This is always the busiest time of year around PU HQ what with the daily human sacrifices and what not, but we’re never too dig up news on the next big event here in the 'burg - The 2010 Pittsburgh Zombie Fest & Walk! 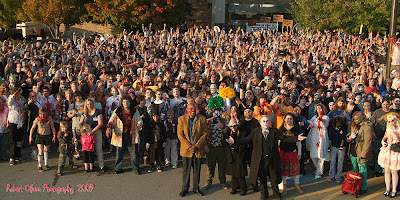 2009 Zombie Walk at Monroeville Mall with the Cast of It's Alive!
Here in the Steel City, we are somewhat ahead of the curve when it comes to all things zombie - hell, our native son George Romero invented the genre right here in our own backyards dammit!...and every year we show our pride at the annual Zombie Fest & Walk, traditionally held where it all began, Monroeville Mall (set the wayback machine to 1978 and check out Monroeville Mall back in the disco era when Dawn of the Dead was filmed by the godfather of zombies, Pittsburgh's own George Romero).

But, as stated earlier, tis the season of change and there has been a slight change to the location for this years event. The newly renovated Market Square, located right next to the big shiny buildings in PPG Place, will be this year's proving ground for the festivities. Why you ask? Simply put by the festivities creator, Pittsburgh's own Mark Menold (aka, Dr. McSquared, host of Pittsburgh's It's Alive Show!), "I guess it got too big for them".  Yes, good reader, our ranks are growing... (Check out the full interview with Mr. Menold here at TribLive).

Mark Menold aka Dr. McSquared
Hopefully this year our ranks will increase 10 fold as our world record title was stolen from us in 2009 (esh! 2009 - The Year of the Bag of Dicks!) by a group in Seattle (we had been the heavy hitter from 2006 until last year when it all came CRASHING down!). WE NEED TO RECLAIM THAT TITLE!!!
Footage of Zombie Fest 2009 @ Monroeville Mall
Still, more important than titles (who we kidding, WE WANT THAT TITLE BACK!!!), the annual Zombie Fest and Walk also benefit the Pittsburgh Community Food Bank (yes, you are encouraged to bring a non-perishable food item). So, go roll in the dirt, pour some ketchup on yer head and shamble on over to Market Square for a hearty dose of brain-eating fun. The date is easy to remember (and coincidentally coinsides with World Zombie Day - 10.10.10 and is free to the public. Hope to see you there! 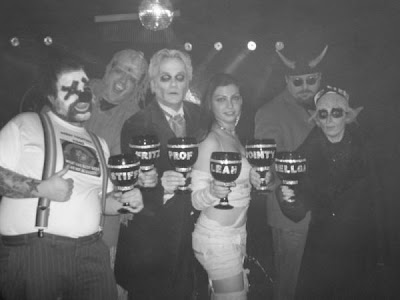 The Cast of It's Alive Show
PSssst... a special applause to our friends at It's Alive Show for putting together such an awesome event! Be sure to tune in on Saturday evenings at midnight for a full dose of mediocre monster mayhem.
Posted by Pittsburgh Underground at 11:00 AM

Anyone know what time the actual walk is? Thank you!