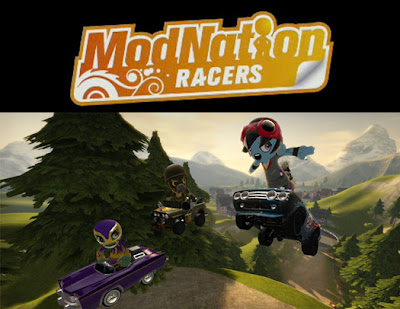 A Room-a-zoom-zooooom!!! With a few weeks under it's belt, the gang here at good ol' PU has finally had a chance to really get into the nuts and bolts of United Front's newest title, Modnation Racers for the Playstation 3.


The Lowdown
For anyone unfamilar with this little gem, it's the second of Sony Playstations 'play, create, and share' games (the first of which being the awesome Little Big Planet by Media Molecule). Modnation Racers is, as it's title suggests, a kart racing game (much like that of it's predecessor, Mario Kart for Nintendo's Wii). This is about where the similarities end though as ModNation surpasses Nintendo's kart racer in just about every way imaginable. Really you say? Sounds like crazy talk? Even lunacy? Seriously - this game is worth every penny!

The replayability factor of this game is seemingly endless, giving the player the ability to create, share, and play with an entire community of would-be kart racing designers. Not only do you get to easily and seamlessly create your own race tracks, characters, and karts (all called 'mods'), but you can also download and play mods created from other players as well.

Creation is incredibly easy and engaging - especially for those who might be worried that the process might be too daunting.

For character creation, you don't have to worry about body height or weight - all the character bodies start out as identical templates, taking their design stylings from that of the urban vinyl culture (those cute little vinyl figures that you see folks decorating like easter eggs - check out the 'My Plastic Heart' site for examples). Modding is the name of the game as you apply decals, animated parts (such as eyes and mouths), apply material properties (rubber, metal, cloth), costume pieces, and even voices to create an avatar that best represents the artistic style of the creator. From there, you can share it with the rest of the world or use it as your own personalized character that you can use in kart races for both in single player campains or online play. The detail in this game is so incredible that your customized figure will even be shown within the cut scenes of the single player play. There is nothing more exciting than to see your creation living and breathing in the virtual world as it interacts with in-game and online players.

Kart creation is just as immersive with a multitude of bodies, paint styles, decals, and props that can be applied to all surfaces of the kart along with raising and lowering the suspensions (both front and back), changing the motor from a serious V8 to a comical hamster in a wheel, or changing your ride from a sleek metallic body to an all wooden form are only a few things that the player can do to stand out on the circuit. One thing to note is that all the karts react the same way on the race track which really enables racers to win based on skill rather than hard to achieve power upgrades that would have made races feel a little off balance. This really puts an emphasis on driving skill and creativity which make this game incredibly addictive as you create and share with the rest of the Playstation community.

The real meat of this game comes from modding a your own tracks. This can be as simple or as detailed a process as the creator wishes. Anyone who is familar with the 'paint box' style of mod creation as found in games like Little Big Planet, The Sims, or even classics such as Lode Runner will take to this style of creation almost immediately. Everything from environment (seaside, desert, jungle, and alpine), terrain brushes, element controls (sun position, sea level, cloud movement), to prop placement is as easy as choosing an icon and then adding it to the playing field. Laying down track is as easy as driving a modded kart that resembles a steam roller around the playing field as you change the elevation on the fly to complete your track. Adding bridges, tunnels, and other road characteristics is made easy using a simple paintbrush tool along the track itself changing and modding your creation with ease. You can even shape the width and height of the road itself to create embankments, narrow corridors, and secret short cuts - all at the discretion of the player.

Check out this video of United Front Developers William Ho and James Greaves as they present their amazing  creation at this year's E3 conference:

The best part is, for anyone who does get intimidated by the any of the controls in the track creation studio, you can actually hit an 'auto complete' to finish any track instantly. You can even use an 'auto populate' feature to add in everything from scenery to track elements such as triggers for traps, weapon pickups, and speed boosts. Very easy to understand tutorials are also in the hands of the user from within the track creation menu in order to view them on the fly in order to get a better idea on how to make the 'perfect' track for you and your friends to race in.

Apart from the incredible tools in order to create what whatever type of character, kart, or track that you desire, the one thing you might be asking yourself at this point is how does the game play? In a word, fantastic! The controls are incredibly responsive as you utilize 'drifting' and 'aerial tricks' to fill up your boost meter that also doubles as power for a very useful and necessary shield. Weapon and speed pickups also make an appearance (ala PS3 Wipeout series) along with various triggers that can activate traps or enable shortcuts along the route.

The racing types seem vaste. Career Central is the single player campain with 28 built in tracks that allow you not only practice your skills for online racing, but also unlock various bits and pieces that can be used to expand your creative pallet within Mod Studio. Another great addition to the Career Central mode is collecting tokens that can be used in Mod Studio at the shop (via an in-game slot machine) to unlock more goodies for your creations.

The racing options doesn't stop there - you can also host a split screen match on your TV for up to four players, you can take one friend with you online in a split screen match, you can host casual races, and XP races. You can access this and a host of other options (the Hot Lap, Time Trials, etc) by going through the ModSpot (the initial Modnation Racer world that you start in when you turn on the game) that also shows the most downloaded characters and karts are even displayed for all the world to see on pedestals or most downloaded tracks that you can nab on the fly. A really nice feature is that if you are in a hurry to get started, all one needs to do is go to the quick menu, bypassing the ModSpot all together to choose your next move with the push of a button.

Graphics and sound are top notch with A LOT of humour thrown in for good measure in the single player tale. Also, if you get tired of the in-game soundtrack, you can also mute it and play your own tunes in the background for a truly customizable experience.

If there is one issue (and their always is when it comes to videogames) with ModNation Racers it's the load times which can seem a bit long for the player that is jonesing for speed, but hey - you're getting a lot of great features with this port so all good things come to those who wait and believe me - ModNation Racers is literally worth it!

The Final WORD
ModNation Racers is literally worth every penny of your hard earned duckets. It's got more racing and creating than any game we've ever played here at good ol' PU and will completely satisfy in just about every way imaginable for the kart fan in all of us. A definite must have for the PS3.

VideoGamey Rating:
Presentation: Other than the long load times this game rocks the casbah! Adding your creator made characters into the in-game cut scenes is a sight to behold (it's alive!!!)

Graphics: Top notch in every way. Taking from the urban vinyl culture as inspiration for the design style was brilliant and the game really gives you the feel of traveling at breakneck speeds!

Sound: Soundtrack is very apt for a kart racer of this type and the voice overs are classic with lots of humour. The in-coming weapons sounds make you jump as you try to escape their impending doom!

Gameplay: Everything about the gameplay is perfection. Drifting and aerial acrobatics are lots of fun, prop elements really add to your racing strategy, and online play is the bomb!

Last Impressions: What's not to love about this game! Create, share, and play is a thing of genius giving the user a seemingly endless stream of content to create and download. The abilty to race online and show off what you got as a racer and a creator makes this a must have for PS3 owners. You will be playing this one until your fingers bleed!

Posted by Pittsburgh Underground at 2:00 PM

Email ThisBlogThis!Share to TwitterShare to FacebookShare to Pinterest
Labels: VideoGamey