The Art of AKIRA at the Toonseum - Starts TONIGHT! 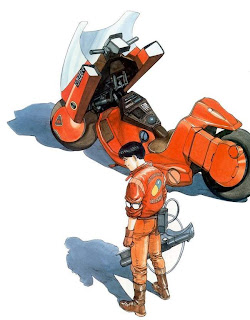 AKIRA: This one wrote the book on Anime
Starting tonight at 7pm to 10pm, the Toonseum will be hosting a ticked VIP opening for The Art of Akira. Those of you who don't live in a bubble are well aware of the classic 1988 anime written and directed by Katsuhiro Otoma based on his hit manga of the same name.

Akira takes place in a futuristic Neo-Tokyo and follows the adventures of Shotaro Kaneda and his best friend Tetsuo who possesses the same mental frequencies similar to Akira, a little boy with god-like mental abilities who destroyed Tokyo decades earlier.

Sounds like impending doom for Neo-Tokyo doesn't it - we won't spoil it for you, however, if you haven't seen this classic in flawless animation (which in many cases trumps anything live action could do), the gang at PU highly recommends you nab a copy and give it a whirl. Many film makers have tried to emulate this classic tale and in fact, take many of it's design ques from Akira (the Wachowski Brothers recycle much of what goes on in Akria in their Matrix Triolgy series ).