Movies That Have Everything: Kick Ass (Does iT?)

The adaptation of Mark Millar and John Romita Jr.'s Kick-Ass kicked off this Friday with a CLOBBERIN'! The gang here at good ol' PU checked it out and it went a little something... LIKE THIS (red band trailer courtesy of TrailerAddict.com):


For you illiterate slobs that don't read (stink-eye), check out our Comics that Rot Your Brain review on 'Kick-Ass' (it's kind of like the Cliff-Notes, but for something FUN). Warning: the following could contain spoilers:

The Lowdown
The Kick-Ass story revolves around poor Dave Lizewski (played with great pathos by Aaron Johnson). A disillusioned kid who's about 120 pounds soaking wet, has a bad haircut, no super-powers, isn't a kung fu master, is of average intelligence, but has one thing most modern day superheroes lack - heart. 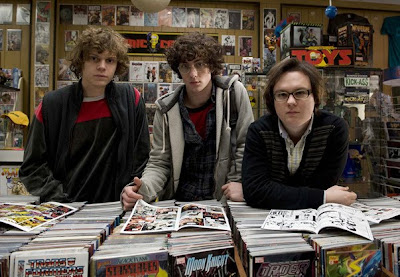 The Gang from Good Ol' PU (I'm the good lookin' one)

Dave's the everyman who's love of comic books inspire him to don a wetsuit bought online (there are A LOT of web references in this story), wield  a pair of green billy clubs, and fight crime for only one reason. He's tired of watching bad things happen to the folks in his New York City surroundings and even more sick of no one doing anything about it. He creates a website persona called Kick-Ass and requests that his readers email him if in peril - kind of a 'next-gen' Bat-Signal. 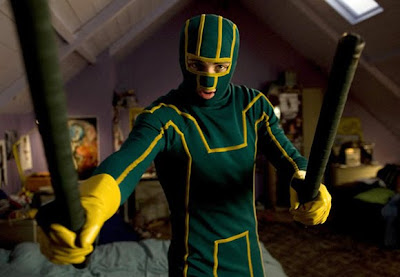 It works (sort of). On his very first outing as a costumed hero, Kick-Ass gets his ass kicked. So bad in fact that he's out of commission for a few months for rehab. Once he returns, he notices his life start to change. That girl Katie he has a crush on (played by the ever so tasty Lyndsy Fonseca) starts to notice him (yet, not in the way you might expect - read the comic, we won't spoil it for you!) and he's got more confidence than  ever. So much in fact that Dave decides to go out again the night he's released from the clink (told you, the kid's got  heart).

This time it works, Dave stops three street toughs (ha! I said street toughs - ha! hooligans! Rabble-rousers! Bad seeds!) from kicking the shit out some unwilling victim. A bystander catches the entire event on his video phone, posts it to the Internet, and KICK-ASS becomes a national sensation.

Alas (who says alas anymore), as with most celebrities, Kick-Ass becomes vastly misunderstood (we joke at PU!). Mostly by mob boss, Frank D'Amico (played effortlessly by Mark Strong - fast becoming one of PU's favorite villains) who thinks that Kick-Ass is responsible for sabotaging Frank's  'family business'. That's when Frank's Battlestar-Galacta-nerd drooling son, Chris D'Amico (played by McLovin' himself - Christopher Mintz-Plasse ) convinces dear old daddy to fund his own superhero exploits as the Red Mist in order to drive out Kick-Ass into the open. 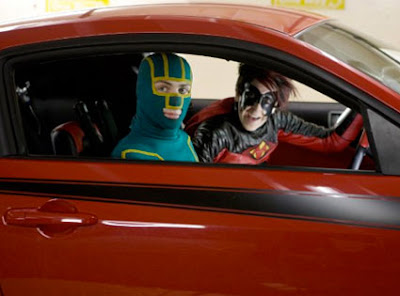 Quick! To The McLovin' Mobile!

As the story progresses (just like in the comic), the true vigilantes of this universe responsible for the mob's woe's appear, wanting to team up with Kick-Ass and Red Mist to take them down.  Big Daddy (another comic character to add to Nick Cage's resume) and his eleven year old daughter, Hit Girl (played by the show stealing Chloe Moretz) are the real deal and add to an already great cast. Being the profanity aficionados that we are at PU, we took great delight in watching this eleven year old virtuoso swear like a bloody sailor as if she had practiced her craft for decades (she made us grin big!). 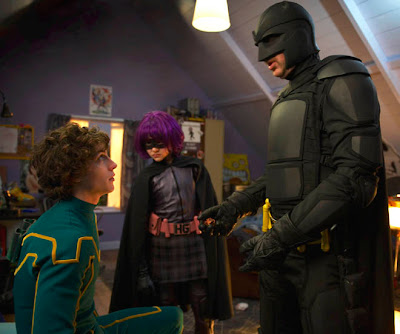 From there it goes into... what a minute... that should lead me right into...

This Movie Has EVERYTHING!
Another movie that had EVERYTHING? Say it ain't so! I don't believe you!  KICK ASS = EVERYTHING!!! Action packed violence from an eleven year old swearing sweetie wearing a Catholic school girl outfit (go Chloe go!), Nick Cage doing his best Adam West impersonation! More boobies!(mmm...Lyndsy Fonseca... you haunt our dreams...), an INCREDIBLE 3D modelled comic book sequence telling the origin stories of Big Daddy and Hit Girl (John Romita Jr. inspired!!!), It's got... McLovin'... MCLOVIN' MAN!!! MCLOVIN' SMOKING A DOOB BABY!!!  It's got BLOOD... and it's got  DOOB... and it's got BOOB! It's got crazies jumping off of buildings! It's got BALL ZAPPIN' (that's right I said BALL ZAPPIN'!) . Did I mention the boobies?! I saw green tights, blue tights, black tights, purple tights, yellow tights - it was TIGHT! This movie has EVERYTHING!!! 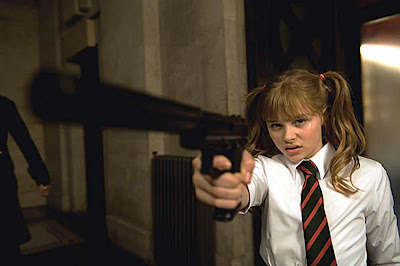 You Bet Your Bippie, This Movie Has EVERYTHING!!!

The Final Word
I got to hand it to both Mark Millar (the Scottish writer responsible for Kick-Ass) and Matthew Vaughn (screen writer) for making TWO very different, but great versions of Kick-Ass. Now I know what you're thinking (that is if you READ the comic by Millar). At PU, we understand why most comic book enthusiasts shutter when they hear about their favorite books being turned into movies. Mainly, how close is the movie to it's source material.

If you are a fan of Millar's work, then you know that WANTED, was a VERY different movie compared to it's superior comic book counterpart. Oddly, both WANTED and KICK-ASS were both optioned while the comic books were being created by Millar. The difference being that KICK-ASS, both comic book and movie versions, are great in their own ways. Each is fairly faithful with the other and in some cases, better than it's mirror image. It's really going to be up to the viewer to make that decision based on his or her own tastes. Personally, and although I loved the movie, I still found the artwork of John Romita Jr. to be incredibly graphic and Millar's story to also be much darker than that of the movie. Regardless, the movie is very faithful in spirit, never straying too far away from the premise of the source material in any drastic way (depending on how 'literal' your interpretation needs to be).


Aaron Johnson is one of the new breed of leading-geeks joining the ranks of  Michael Cera (Superbad) and  Jesse Eisenburg (Zombieland).  He brought a lot of courage to the role of Dave Lizewski and really made you care for the big dope as he got ass kicking after ass kicking. 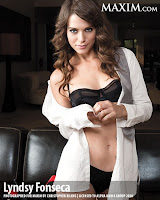 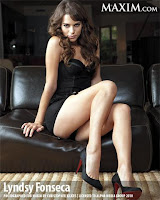 Lindsy Fonseca is a little underplayed (and somewhat unbelievable) as the totally hot chick who loves the 'lame ducks' (hence her odd attraction to Dave). Still, A LOT of fun to look at (we at PU hope to see MUCH more of Ms. Fonseca as time marches on - evil grin). Chloe Moretzis remarkable and hands down the star of the show - if there's a reason to go, she's it. I've seriously never seen a little girl swear like that in my life (ok, wait a minute - that's not true, PU is in the Northside of Pittsburgh). Nick Cage has this optimistic Ned Flanders feel about him when not in superhero mode and a fanboys dream mix of Adam West and William Shatner when suited up to do the deed - say what you want about Nick Cage, but the guys got as much heart as Kick-Ass himself. Mark Strong is a very believable mob boss and never plays it too over the top, becoming a caricature of a hit man. Finally, McLovin'... I mean, Christopher Mintz-Plasse. I'm sorry dude, but at good ol' PU, you'll always be McLovin' (don't worry Christopher - that's not a bad thing).

In a nutshell, KICK-ASS kicked my ass - both it's comic and it's movie form. Now comes the long wait until BluRay. KICK-ASS HAS EVERYTHING!!!


Movies That Have EVERYTHING Rating: 10
Posted by Pittsburgh Underground at 11:17 PM