After two years of separate adventures with Daredevil, Jessica Jones, Luke Cage, and Iron Fist, the gang has finally banded together TODAY for The Defenders on Netflix! Check out the trailer!

Based on the 1971 Marvel comic of the same name (but ever changing roster of heroes), this live action mini series follows Jessica Jones (Krysten Ritter), Luke Cage aka Power Man (Mike Colter), Danny Rand aka Iron Fist (Finn Jones), and Matt Murdock aka Daredevil (Charlie Cox) as they team up one month after the events of Iron Fist / Season 1 to defeat villainous group known as ‘The Hand’.

The Hand has been a thorn in both Daredevil and Iron Fist’s side for a while now with Matt Murdock battling them at the end of Daredevil / Season 2 (stealing the body of his dead lady love, Elektra in the process) and caused all kinds of mayhem for Danny Rand in Iron Fist / Season 1. Now the hand is causing big trouble in New York City and the gang needs to band together to end the evil. 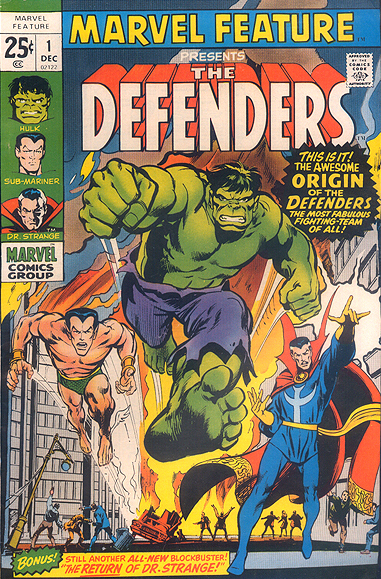 The Defenders first appearance was in written by Roy Thomas in 1971 for Marvel Feature #1 with team roster led by Doctor Strange and including Hulk, Namor, and eventually the Silver Surfer. That group ran until 1986 with rotating heroes such as Valkyrie, Nighthawk, Hellcat, Gargoyle, Beast, the Son of Satan, and Luke Cage. The Defenders also went through many incarnations throughout the years including the New Defenders, The Secret Defenders, The Fearless Defenders, and even the Last Defenders.

Hopefully this won’t be the last time we see this incarnation of The Defenders and season 1 is only the start! The Defenders begins TODAY on Netflix!
Posted by Pittsburgh Underground at 11:30 AM