It’s Movie SIGN!!! Talk about a good Friday!!! One of our very favorite TV shows, Mystery Science Theater,  is back thanks to Netflix, both the new and old gang from the Satellite of Love, and fans that raised $6.5 million clams to make it a reality!!! Check out the trailer below!

For those of you who have been living in a bubble for the last few decades (it’s been around since 1988) Mystery Science Theater 3000 (MST3K for us MSTie's) was the story of Gizmonic Institute janitor Joel Hodgson (also creator of the series) who is sent into space to live on the Satellite of Love by his bosses Dr. Clayton Forrester (Trace Beaulieu) and Dr. Laurence Erhardt (J. Elivis Weinstein) who is  eventually replaced TV’s Frank (Frank Conniff) in their underground lair called ‘Deep 13’. 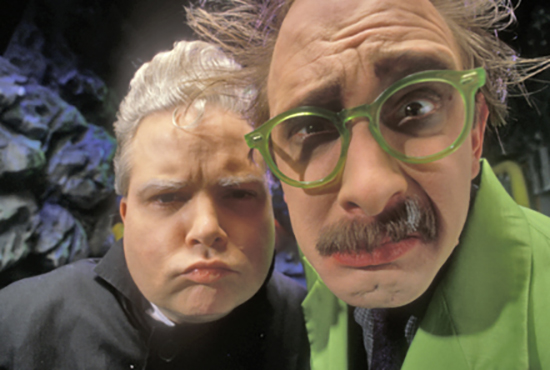 Joel is forced to watch bad movies that he has no control over in order to find the perfect B-movie to use as a weapon in Dr. Forrester’s plan for world domination. To keep his sanity, Joel builds some robot pals to interact with including Tom Servo (Kevin Murphy), Crow T. Robot (Bill Corbett), Gypsy (Jim Mallon), and Cambot (the ship recorder and announcer) who keep him company within the satellite and in the theater where they riff during the films. 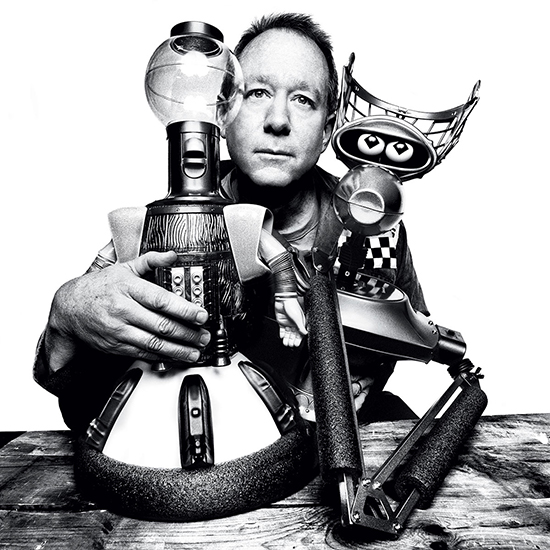 Originally a late night local TV show produced by Jim Mallon (production manager and voice of bot Gypsy) on KTMA-TV in Hopkins, Minnesota the show eventually made it’s way to “The Comedy Channel’ or what is now Comedy Central. Mallon and Hodgson, securing the rights to their show, created Best Brains Inc., splitting the ownership of the original concept equally. 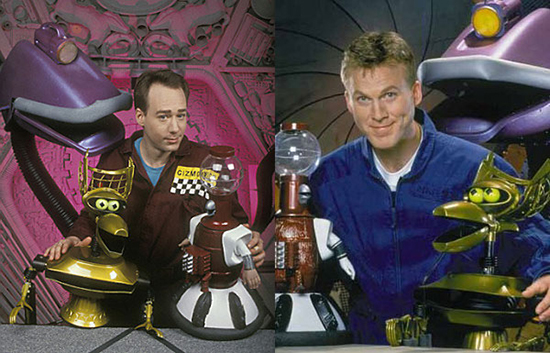 Although Joel had a great run between 1988 and 1993, he eventually split over disagreements with Mallon over creative control and Mallon’s insistence to create a full length feature film based on the show. Although the end for Joel, it was the beginning for Mike J. Nelson (also head writer for 11 seasons) who stepped up to play all new janitor to torture, along with Dr. Forrester’s mother Pearl (Mary Jo  Pehl) that would eventually spawn the full length feature film that Mallon had wanted, aptly titled Mystery Science Theater 3000: The Movie. Check out the trailer below!

Eventually, MST3K jumped networks once again in 1997 to the Sci-Fi Channel (before they started calling themselves SyFy) along with Mike Nelson, his bots, Pearl, and two new characters - the simian Professor Bobo (played by Kevin Murphy) and Observer aka ‘Brain Guy’  (played by Bill Corbett) who as his name would suggest, carried his disembodied brain in a petri dish. The show lasted on SyFy until 1999 when Mike and the bots finally escaped the Satellite of Love only to move into an apartment in Minnesota to, as you may have guessed, spend their free time watching bad movies and mocking them the entire time. 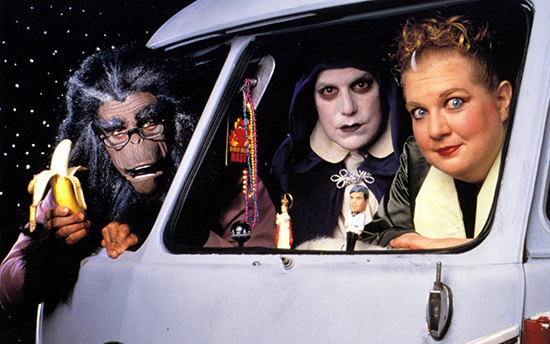 Never fear - the monster that was MST3K did not die! During the hiatus of MST3K The cast broke off into two riffing camps. MST3K's creator, Joel Hodgson, spun off  Cinematic Titanic which ran touring engagements from 2007 to 2013, continuing the tradition of riffing on bad movies with MST3K cast members Trace Beaulieu, Frank Conniff, Mary Jo Pehl, and J. Elvis Weinstein. The Cinematic Titanic Youtube Channel still exists with some clips of their work.

Rifftraxx, launched by Mike J. Nelson in 2006 continued the riffing tradition on bad movies, but also on topical ones as well all available for purchase on the Rifftrax website by app, streaming, and downloads. Both Kevin Murphy and Bill Corbett joined Mr. Nelson who also tour to theaters all over the country performing for live and streaming audiences (which can also be downloaded as well). They are still in operation today and well worth a subscription to their service!

That brings us to present day where Joel Hodgson finally reacquires the rights to his creation once more making the sky literally the limit. Running on the momentum of Cinematic Titanic along with his association with SHOUT! Factory and their home media releases of MST3K (and their awesome Turkey Day reruns every Thanksgiving), the additional reruns appearing on Netflix and their Youtube Channel, and a successful Kickstarter campaign, Joel has been able to do what no one could - bring MST3K back after 16 very long years! 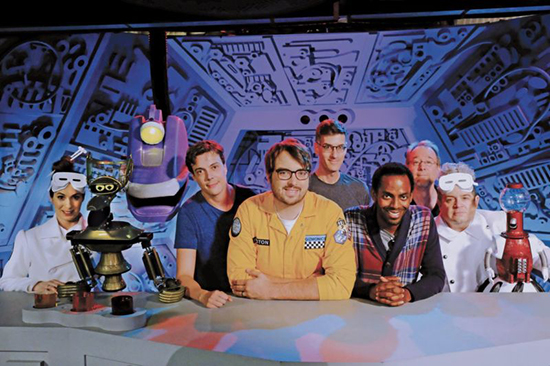 Fourteen episodes start tomorrow (Friday, March 14th) on Netflix with Felicia Day (as Kinga Forrester) and Patton Oswalt (her henchman Max) starring along side the latest resident of the Satellite of Love, Jonah Ray (playing Jonah Heston). Yes, the bots are back, but with new comedians helming the controls with Hampton Yount (Crow), Baron Vaughn (Servo), and Rebecca Hanson (alum of Second City) who will be the first female comedian playing Gypsy to join the crew.  Special guest appearances from Pehl, Corbett, and Murphy reprising their roles as Pearl, Professor Bobo, and Brain Guy have been announced along with more surprises along the way.

If you’ve never seen an episode and have a Netflix subscription, now’s your chance to join in on the fun as new episodes of Mystery Science Theater start tomorrow. Once you’ve binged those, you can also catch some of the classic MST3K’s as well both on Netflix and the MST3K Youtube Channel!  Until next time...


POOPIE!!!
Posted by Pittsburgh Underground at 11:30 AM