Movies That Have Everything: Electra Woman and Dyna Girl STARTS TODAY! 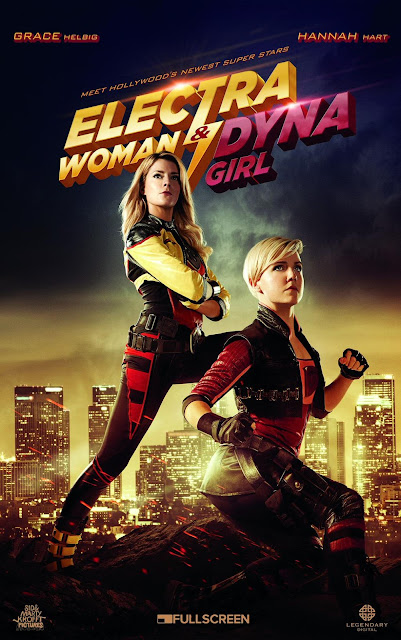 Ah the good ol' days of Saturday morning television! Back in the 1970's one of the many mainstay's that you could always count was the brilliance of Sid and Marty Krofft, the gang that brought us H.R. Pufnstuf, Sigmund and the Sea Monsters, Land of the Lost, and one of our favorites - Electra Woman and Dyna Girl!

The original only lasted for one season back in 1976 and starred Deidre Hall (of Days of Our Lives fame) as Electra Woman and Julie Strangis as Dyna Girl. The duo worked as reporters for Newsmaker Magazine for their day job, but secretly operated from their Electrabase as crime fighters with the aid of CrimeScope (their monster-sized computer) and electronics whiz Frank Heflin (played by Norman Alden) against a vast array of super villains each week. Check out the awesome show opener!

Fast forward forty years to 2016. Starting today the 'reboot' of Electra Woman and Dyna Girl comes to all digital platforms today staring YouTube phenoms Grace Helbig and Hanna Hart taking on the title roles. In this new incarnation, the story follows Electra Woman (Helbig) and Dyna Girl (Hart) as they move from Akron to Los Angeles in hopes of making it big in the crime fighting world, only to find competition with other vigilantes and infighting amongst themselves. Check out the trailer!

Both Helbig and Hart have large social media followings with a combined total of 10 million subscribers and followers over all of their YouTube and social media platforms. Grace Helbig is the creator and host of the YouTube Channel it'sGrace as well as the podcast Not Too Deep with Grace Helbig. Hanna Hart (aka Harto) is best known for her YouTube series My Drunk Kitchen where she is usually found cooking while intoxicated.

For more information, check out the Electra Woman and Dyna Girl site or their Facebook page.  The movie hits all digital platforms TODAY!!!