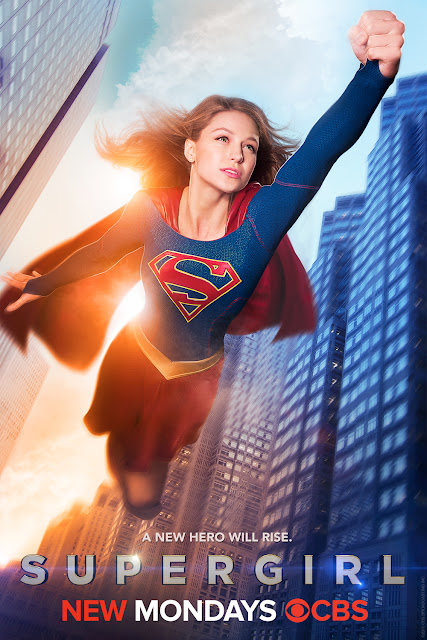 Look up in the sky! It’s a bird! It’s a plane! It’s Superman’s cousin! That’s right gang - tonight at 8pm on CBS, Kara Zor-El, aka Supergirl will be soaring onto television screens with Melissa Benoist in the title role. Check out the trailer below!

It’s been a while since we’ve seen a live action version of Clark Kent’s cousin in action, the last being Laura Vandervoort on Smalleville, and Helen Slater before her in the 1984 movie of the same title. Ms. Slater now plays Eliza Danvers (Kara’s adoptive mother) along with Dean Cain (from The New Adventures of Lois and Clark) as her adoptive father Jeremiah Danvers.

Produced by Flash / Arrow alum Greg Berlanti & Andrew Kreisberg, it looks like there will be lots of easter eggs for fans of the DC Comic in this show including Peter Facinelli as Max Lord, Brit Morgan as Livewire, Jeremy Jordan as Winslow Scott aka Toyman, Chris Browning as Reactron, Justice Leak as Hellgrammite.

Other characters to appear include Red Tornado, T.O. Morrow (Flash villain, responsible for the creation of Red Tornado), Sam Lane, and NON (the mute, 1/3 of the 3 Kryptonian villains.

And yes, that is Harrison Ford's wife, Calista Flockhart playing Cat Grant (another character from the comics, previously played by Tracy Scroggins on The New Adventures of Lois and Clark). Looks like lots of high flying adventure for this version of Supergirl - we can’t wait to see what’s she’s made of!

Pittsburgh Underground had a bunch to say about Supergirl in our 2nd Episode of the PU Podcast (right at the 26:08 mark) so check it out for some more info on the show! Supergirl premieres tonight at 8pm on CBS.