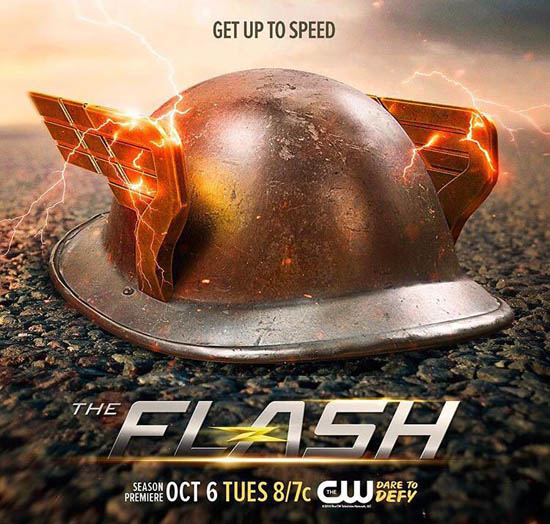 It’s finally back! The Flash / Season 2 starts tonight at 8PM on the CW! Last year, Barry Allen (Grant Gustin) and the gang from Central City left us on a cliff hanger as the timeline started unraveling with the apparent death of Eddie Thawne (Rick Cosnett) by his own hand in order to destroy his ‘distant’ relative, the Reverse Flash / Eobard Thawne (played by both Tom Cavanagh and the body swapping Matt Letscher). Not only did this open up a vortex in the space-time continuum that began to swallow the city, but our hero was last seen speeding through it’s eye. Check out the tail end of last seasons finale!

If that wasn’t awesome enough, Jay Garrick’s helmet popped out of the rift (the golden age Flash), visions of the future - including Killer Frost aka Caitlin Snow (Danielle Panabaker),  Eddie Thawne was sucked into the rift itself, and we caught a glimpse of Hawkgirl (Ciara Renee) who will be appearing in the spin-off show, Legends of Tomorrow (shown in the above clip at the 1 minute mark).

For season 2, it’s anybody’s game - has the timeline changed now that Eddie Thawne effectively stopped Eobard from ever existing by making the ultimate sacrifice? Where did the rift take Eddie as he was swallowed up by the wormhole? Is Barry’s mother now alive now that the Reverse Flash was never around to kill her in the first place (also keeping his father safe from a murder conviction)? What’s changed between Barry and the West family who essentially adopted him after the murder of his mother? Could Dr. Wells not have suffered the horrific fate imposed on him and his wife by the Reverse Flash? Did the particle explosion ever happen now that the timeline has been altered? What does this mean for the villains that received their powers due to the explosion, let alone heroes like Firestorm and the Flash himself?

All we do know for sure is that Professor Zoom will make his first appearance as the big bad for season 2, voiced by Tony Todd. Check out the season 2 trailer below!

This season will also introduce Jay Garrick (the golden age Flash, played by Teddy Sears) along with Wally West (the New 52 ‘version’, played by Keiynan Lonsdale) known not only as the nephew of Iris West (Candice Patton), but also ‘Kid Flash’ (who eventually takes up the mantel of The Flash after Barry’s heroic self-sacrifice / disappearance during Crisis on Infinite Earths).

The Flash was one of  Pittsburgh Underground’s favorite shows last season that never failed to satisfy on every level - great casting, inventive stories (written in part by our old pal Geoff Johns, Chief Creative Officer at DC Comics), and some of the best effects work on television today. For more on what we thought of The Flash / Season 1, check out our PU Podcast / Episode 2; The Fall TV Preview (right at the 15:05 mark).

The Flash / Season 2 speeds to the CW tonight at 8pm.
Posted by Pittsburgh Underground at 11:30 AM