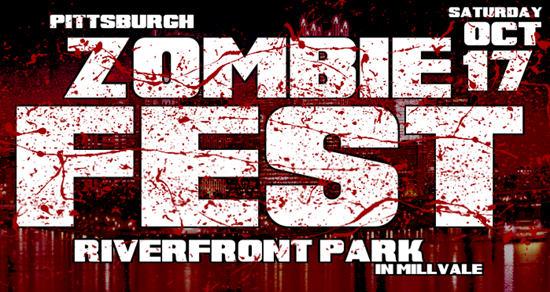 Greetings once again all you ghouls and fools! It’s our favorite time of year when the dead rise once more for the annual Pittsburgh Zombie Fest presented by the It’s Alive Show!

This year, the entire event shambles over to Riverfront Park in Millvale on Saturday, October 17th starting at noon to 8PM. Admission is $10.00 (with kids under 12 getting in for free!). As always, this fright filled event isn’t just to give you the heebie-jeebies - it’s also for charity so don’t forget to bring a non-perishable donation for the Greater Pittsburgh Community Food Bank.

There will be food, vendors, and activities for the undead crowd as well as live entertainment provided by the area's best bands including Klaymore, Motorpsychos, Fistfight in the Parking Lot, Dethlehem, Lady Beast, and The Bloody Seamen! The It's Alive Show with be taping their tenth anniversary special with cameras and interviews throughout the day.

More info can be found at the Official Pittsburgh Zombiefest 2015 Website or Facebook page. Also, don’t forget to check out the Zombie Rules of Conduct if you plan on attending this year. Hope to see you there!

*Parental Advisory: Due to the graphic nature of the costumes and make up, Zombie Fest might be what some people would refer to as a "PG13" event.

Zombie Fest typically has attendees in make up gorier than the scariest horror films. The bands are loud and sexy costumes can be revealing. In other words, it's awesome.
No functional or dangerous weapons and no containers of fake (or real) blood will be allowed at Zombie Fest.
Posted by Pittsburgh Underground at 11:30 AM