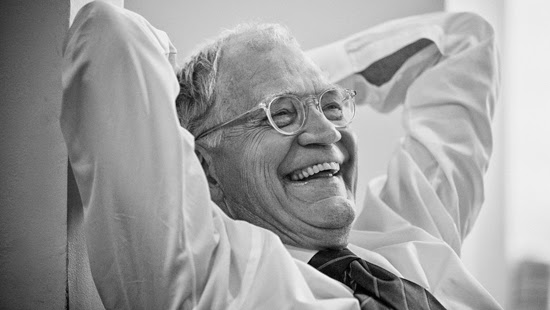 After 33 years on television tonight will be David Letterman’s final show.

There’s been a lot said about David Letterman and his career for the last year counting down to tonight. Let’s face it - he’s been a part of our lives for over three decades now through both the good times and the bad times. Having that friendly face to make us laugh at the end of a long day has always been a comfort throughout the years and one that will be sorely missed after tonight’s final Late Show.

With that said we wanted to say thanks Dave - Thanks for the pranks you pulled on the unsuspecting public. Thanks for the stupid pet tricks - both the ones that worked, and the ones that didn’t pan out the way you had hoped. Thanks for the crazy cooking segments that resulted in less cooking and more slapstick with you drinking or eating something you shouldn't have or merely throwing the ingredients at the camera.

Thanks for making regular folks guests on your show proving that you didn’t need to be famous, glamorous, or even popular to make it big on television. Thanks for introducing us to Rupert Jee from the Hello Deli, stage hand Biff Henderson, comedian Chris Elliot, bizarro announcer Alan Kalter, Paul Schaffer and the Late Night Band, your wonderful mother (we loved her Olympic coverage!), and the terribly missed Larry ‘Bud’ Melman (aka Calvert DeForest).

Thanks for throwing things off buildings, crushing stuff in a hydraulic press, wearing suits made of velcro & rice krispies, and creating a Mentos and soda powered car. Thanks for all the Top Ten lists, Small Town News, Will It Float, Is This Anything, and bringing the audience into the fun every step of the way.

Thanks for showing us all that age doesn’t matter - you can be a kid ever day of your life if you just allow yourself to be silly. As a kid growing up, you were the coolest adult imaginable - keeping us up late past our bedtime to entertain us in ways our parents would have never allowed. You created viral pieces of fun before ‘viral’ was even a thing.

Thanks for being there when we needed you the most. We’ll never forget your courage and heroism after 911 when you immediately came back on the air to bring up our spirits, ease our fears, and show the villains of the world that they couldn’t keep us down. You became more than a comedian that night - you became our champion.

Thanks for all the great guest stars over the years from Bill Murray - your first and funniest guest star, to Harvey Pekar - underground comicbook writer and crank, Andy Kaufmann and all the drama he brought with him,  Charles Grodin who’s curmudgeonly demeanor only made us laugh more, Regis Philbin who popped up screaming at the top of his lungs at the most unpredictable moments, Jack Hanna and all his unpredictable animals, and of course all the rest - too many to name, but definitely not forgotten.

Most of all Dave - thanks for just being you. Goofy, silly, irreverent, and down to earth. The gang at Pittsburgh Underground thanks you for so many years of laughter and fun. We wish you the best in your retirement - have fun with son Harry. He’s a lucky kid to have a dad as fun as you. As a matter of fact we all were - thanks for bringing us into your crazy world and please don’t stay away for too long as the end of our day won’t be the same without you. Keep in touch and let us all know how the good life is. Take care, stay fun, and stay tuned...
Posted by Hot Toddy at 11:30 AM