Hey gang! Looking for something FREE to do this Sunday evening? If you saw and enjoyed "OLIVER TWISTED," come hear its companion piece, whose events take place simultaneously!

Continuing the celebration of our landmark 13th season as Pittsburgh's only dark fringe theatre company, The Rage of the Stage Players will be holding a "seated reading" of Pittsburgh playwright James Michael Shoberg's HOOKED (inspired by the novel "Peter and Wendy by J. M. Barrie), the third play in his "Twisted Fairy Tale" series. 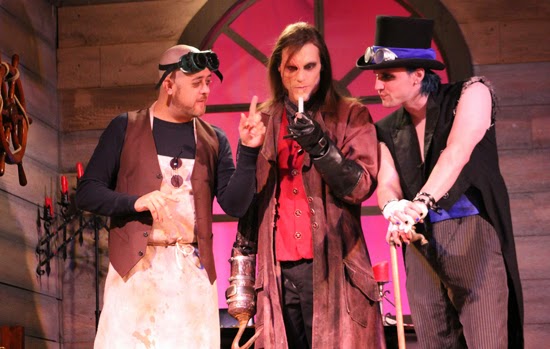 Rage wanted to give fans, who might have missed their opportunity to see the show fully staged, an opportunity to hear it read and characterized by some of our very best actors--both current, and from years past--some of whom originated the roles themselves onstage!

This script, which premiered in October of 2012, is a grim, violent twist on J. M. Barrie’s novel, "Peter and Wendy," set in London's bleak future. The very worst of it--"Old London"--is overwrought with crime and drugs, and societal decay has left the district a ruined husk of what it once was. When an injured young punk, referring to himself only as "Pan," crosses paths with a girl named Wendy Darling, she and her two brothers, John and Michael, are drawn deep into the heart of Old London, where even the junkies, prostitutes, gangs, and piratical thugs have something to fear--a hideously disfigured drug lord named James, better known on the streets as "Hook."

The fun begins on Sunday, (Sunday, October 26th, 2014) at Off The Wall Theater - Pittsburgh Theater Rental (25 W Main St, Carnegie, Pennsylvania 15106) FOR ONE NIGHT ONLY! First come, first served seating! There will be a talkback with the playwright and cast afterward (time permitting).

Admission is free, but we welcome any small donation you'd be willing to offer, to help support Rage's unique brand of local fringe theatre! Hope to see you there!
Posted by Pittsburgh Underground at 11:30 AM