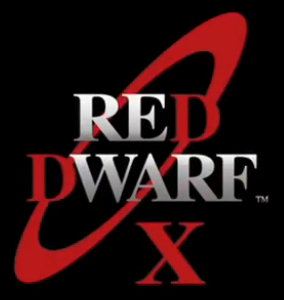 Greetings smeg-heads! A super nova of joy has just exploded in jolly old England as news of
Red Dwarf, Series X will be airing in the U.K. (with the U.S. not far behind) this fall! Check out the trailer!

For those of you who've been living in a bubble for close to two decades, Red Dwarf is the science fiction comedy brain child of Rob Grant and Doug Naylor that's been on again, off again, on again (in typical Britcom style) since 1988! The title, Red Dwarf, refers to the name of the British mining ship that our central characters reside on - big as a city and resilient as the Star Ship Enterprise, Red Dwarf looks the cousin of  Mystery Science Theater's Satellite of Love with a red paint job. 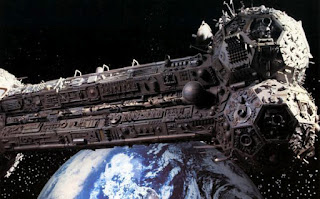 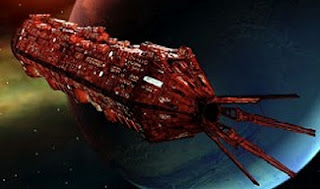 Originally airing on BBC 2, the central story involves the character of Dave Lister (played by Craig Charles), the lowest ranking crew member of the mining ship Red Dwarf and the last remaining survivor of planet earth as a result of being frozen in stasis (a punishment for smuggling his pet cat Frankenstein on board) during an accident that killed the entirety of the ships crew. Not only is Dave the last man from earth, he's also a repugnant slob of a man who eat's everything with curry and fancies himself as the world's greatest guitar player (although a tone deaf gimp).

His bunkmate, Arnold Judas Rimmer (played by Chris Barrie) is the second lowest ranking member of the crew who inadvertently kills everyone on board due to a radiation leak (minus Dave who is put in stasis by Arnie) as a result of failing properly replace a drive plate on Red Dwarf. This neurotic, overly fussy, coward of a boob is brought back as a hologram (you'll note the giant letter 'H' firmly planted on his forehead) because he is considered to be the person most likely to keep Lister sane.

The Cat (played by Danny John-Jules) is a huminoid creature who evolved from the offspring of Lister's smuggled pet cat and is a complete and total narcissist at the beginning of the series - only concerned with eating, sleeping, and looking his absolute best (he's Little Richard, Prince, and James Brown all rolled up into one). His color coordinated organs come complete with the coolest sounding heart beat this side of Saturn. 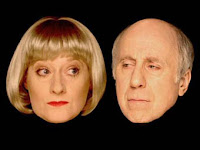 This ship's computer Holly (played both by Norman Lovett and then Hattie Hayridge) has an IQ of 6,000, but has developed 'computer senility' after being left alone for 3 million years during Dave Lister's time in stasis. Midway through the series, Holly decides to give himself a sex-change (although he's really nothing more than a floating head) resembling his doppleganger from a parallel universe that he falls madly in love with.

Kryten (played by Robert Llewellyn), is the ship's OCD ridden clean freak of a mechanoid who is built to serve until Dave Lister encourages him to break his programming to think for himself. He's part Herman Munster, part C3P0, and 100% hilarious! Robert Llewellyn is one of the best parts of Red Dwarf worth the price of admission!

Finally, Kristine Kochanski (originally portrayed by Clare Grogan, but then reprised by Chloe Annett) is Dave Listers long lost crush, who like the rest of the crew of Red Dward is killed due to Arnold Rimmer's incompetence. Of course Kochanski eventually rejoins the crew, hailing from another parallel universe just before the bridge to her own dimension disintegrates. In the very last outing with the boys from the Dwarf, Red Dwarf: Back to Earth, Lister is lead to believe by Kryten (the sole witness to the events) that Kristine Kochanski had died. This turns out to be a ruse as she actually leaves poor Dave due to his over indulgence and lack of self-respect which she felt was slowly killing her.

Red Dwarf: Series X was declared 'creatively complete' on June 19th 2012 with the Red Dwarf team working like crazy to get everything not just ready for airing on the BBC this fall, but also to get the series prepared for DVD and Bluray releases almost immediately after it airs, thus coming to homes in November of this year.

The gang here at Pittsburgh Underground can't wait to get our grubby little hands on the next adventures the crew of the Red Dwarf. With that said, here's a compilation of Smeg Ups from their latest adventures in Red Dwarf: Back to Earth!

Red Dwarf: Back To Earth / Smeg Ups - Part II
Posted by Pittsburgh Underground at 11:30 AM