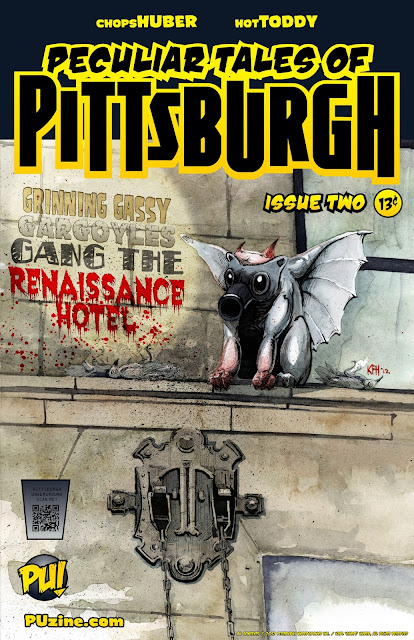 Look out below!!! From the high skies to the Pittsburgh Underground, the PU Pulps are flowing and soaking in FREEBIES!!! That's right gang - your's to download to stick to your cousin's fish tank, your sister's tricycle, or your grannies booze fridge!

This month, our old pal, Chops Huber has slathered another mind-numbing terror from above in
Peculiar Tales of Pittsburgh / Issue 2 /  Grinning Gassy Gargoyles Gang The Renaissance Hotel

Trivia From the Worthless Information Vault of Chops Huber:

Did you know that Pittsburgh was named the most livable city by Forbes in 2010. In a 2012 ranking of 277 metropolitan areas in the United States, the American Lung Association ranked the Pittsburgh metropolitan area as having the sixth-worst pollution in both short-term and year-round particle pollution and the 20th worst ozone (smog) pollution, results that have been disputed by government.

Dont's forget to use these free posters as a way to link to us from anywhere in the world using your smart phone and the QR code on PU! at the bottom left of the poster (or just type in our web address the old fashioned way at www.PUzine.com).