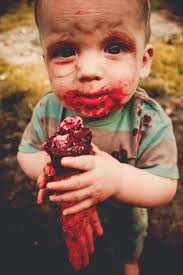 Anyone who knows the gang here at good ol' PU knows that we have a bit of a bone for the undead in all their forms (yes, even Dead Zed Zombie - the pain in our ass where a pill can't reach).

Chances are if you've talked with any of us in person that you may have had many a philosophical discussion on the physiology, psychology, and over all plausibility that zombies could exist in our world.  As always there's a yin to every yang. For example - the bitter and overly opinionated boobs in the room that have to remind us that no Virginia - there is no Santa Claus, Easter Bunny, global warming, legal immigrants, or ZOMBIES...

With that lie laughed at, check out this TRUE story that happened over the weekend in Miami, Florida.

I don't know about you... but this has ZOMBIE COVERUP written all over it. That's right folks it's finally happened - the end of days - bad mojo rising - the omega. Anyone from the Pittsburgh area (known as the zombie capital of the WORLD) can see the signs immediately - an undead act caught in public, horrified citizens, confused police, THEN the coverup (radiation, rabies, or in this case 'super' drugs), and then chaos (hey, go ask George Romaro - he'll tell you how it goes down!).

Well, the Mayans predicted that 2012 was to go down in infamy. Hell, if all it took was the end of days to finally be right about something, then all we can say is...

And to all you naysayers and your uninformed opinions about Big Foot, the Loch Ness Monster, the theory of Atlantis, and of course zombies - the gang here at Pittsburgh Underground doesn't like your attitude and quite frankly...