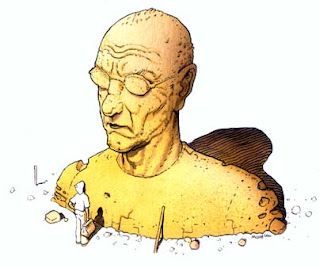 It's a sad day in the world of comics as another one of the masters has left our world - legendary comic book artist, Moebius (aka Jean Giraud) who lost his battle with cancer - he was 73.

One of the most enduring figures in European comics and pop culture, Moebius was co-founder of Heavy Metal Magazine and brought his influence and design aesthetic to such seminal films such as Aliens, Tron, and The Fifth Element.

Email ThisBlogThis!Share to TwitterShare to FacebookShare to Pinterest
Labels: Announcements, Comics To ROT Your Brain